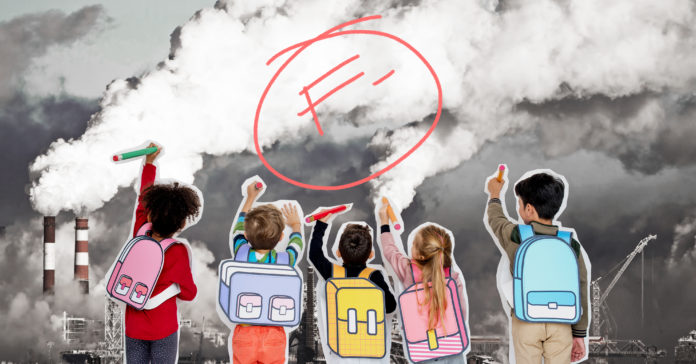 Texas is failing at teaching the next generation about climate change, according to a new report from the National Center for Science Education and the Texas Freedom Network Education Fund.

Thirty six states and the District of Columbia rely on the Next Generation Science Standards for developing course curriculum on climate change and global warming. Texas isn’t one of them. Instead, Texas is among six states that have chosen to write its own standards. That is the reason for the state’s F grade in the report.

“Only in addressing the human impact on climate change did the state’s standards receive a nonfailing grade (but only barely),” the report states.

Texas standards were found to be “vastly overspecific” with an abundance of details on a variety of topics that crowds out opportunities to address climate change. The report authors called it “death by a thousand specialized details.”

Texas standards do acknowledge that climate change is real but otherwise largely ignore the issue. That, the researchers found, is failing to prepare students for studies of climate change in college and for responsible participation in civic deliberation on it.

“Not only is there hope, but [also] some very meaningful and potentially rewarding career opportunities in mitigating climate change, e.g. smart grid technologies, design of more efficient transportation and housing options, installation, maintenance, and optimization of renewable energy infrastructure,” the study states.

Texas is in the process of reworking its standards. The report views that as a good place to start, noting that the NGSS provides a good model but that even those standards can be improved upon. The report also recommends integrating climate change elsewhere in the state education standards. New Jersey, for example, revised its standards to encourage practically every teacher in the state’s public school system to discuss climate change in appropriate educational contexts with their students.

“The purpose of public education is to prepare today’s students to flourish in the world that they will inhabit tomorrow,” the report states. “That includes equipping them with the knowledge they need to meet the challenges they will face in that world. Insofar as a set of state science standards fails to recognize that climate change is real, caused by human activity, serious, and soluble, it is not fit for this purpose. Students, and the rest of society, deserve better.”