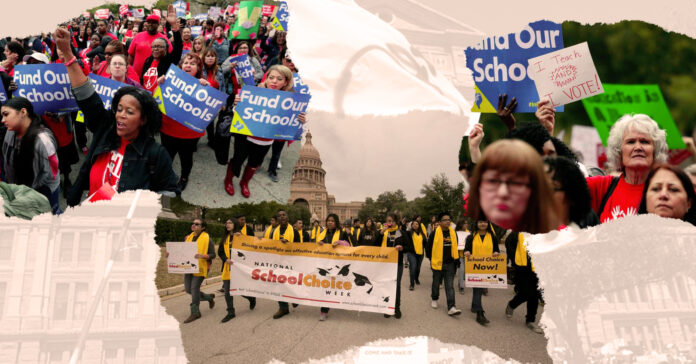 In the midst of a teacher exodus crisis, retired Texas teachers are still optimistic about their chances of securing the first increase in their monthly pension checks in a decade.

Fueling their spirits is the shape of Texas’s largest teacher pension fund. According to The Houston Chronicle, the fund’s executive director said the fund is on firm enough funding for state lawmakers to have a “healthy discussion” about hiking retirees’ checks – in next year’s legislative session, lawmakers are projected to have a $27 billion surplus.

A recent nonprofit report found that Texas still offers worse teacher retirement benefits than any state in the country except for Louisiana, as reported by The Houston Chronicle.

The majority of the state’s retired educators don’t receive Social Security, leaving them reliant on pension benefits, which have long failed to keep pace with cost-of-living expenses. And more than half of them have never seen an increase in their monthly payments.

And while there seems to be an agreement that retired teachers aren’t receiving enough, everyone wants to handle it in a different way.

Last year, House lawmakers considered increasing benefit payments by 6 percent, capped at $100 per check. The measure received widespread support, but never advanced to the floor of the Texas House for a vote.

However, $100 per check did not receive a warm welcome from the Leaders at the Texas Retired Teachers Association and other advocacy groups who are pushing for a more significant increase next year.

“My folks would look at a cap of $100 and say, with $27 billion in additional revenue in the state coffers, the most I’m going to get after 20 years of not having a raise is an extra $100 a month? That’s hardly going to pay for a tank-and-a-half worth of extra gas,” Tim Lee, the association’s executive director, said in an interview.

“Educated retention is based on more than working conditions today,” said Felicia Owens, a member of the Texas State Teachers Association.

“Retirees should not have to be greeters at Walmart or work at Taco Bell, Whataburger or Popeyes just to have enough money to survive.”