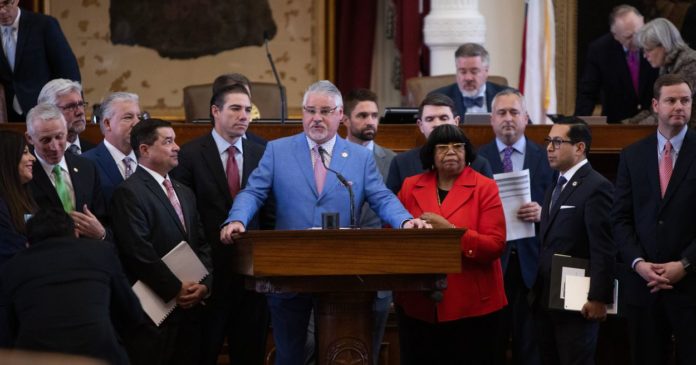 In May of 2019 the Texas Legislature passed the now historic House Bill 3 (HB 3) to address public school funding. The bill was enormous, with a fiscal note of $11.6 billion. A little over half of that went to public education ($6.5 billion) while the additional $5.1 billion went to property tax reform. Two weeks later the Governor signed the bill into law.

The vote was nearly unanimous in both chambers of the legislature. The Senate vote was 31-0 while the House voted 148 ayes, one nay, and one not voting. At the time, the economy was good, crude oil was close to $67 per barrel, and the Comptroller had just predicted another $518 million would be added to the state’s surplus. Not many people knew what a coronavirus was, there was no global pandemic, and the future looked bright. As one West Texas legislator told me in his office, “This economy is going to keep going. We don’t see an end in sight.”

In March of 2020 everything seemed to change. Oil prices dropped from nearly $62 per barrel in January to $32 in March. In the following months they went negative and then hit $21 in April. As of this writing it has bounced back to $52 for West Texas Crude with an expectation that it will go higher.

Almost at the same time, the COVID-19 pandemic hit and local and state governments enacted shutdowns of businesses that hit Texas’ economy hard. While the economic losses were great, Texas was better positioned than many states and the economy now seems to be doing better than many expected. According to the latest revenue estimates from the Comptroller, Texas is negative an estimated $1 billion with more revenue expected.  This is good news considering a July 2020 estimate of a $4.6 billion shortfall.  According to noted economist Ray Perryman, “After a rugged and seemingly endless 2020, we are beginning to see the light at the end of the COVID-19 tunnel. We are not done yet, but with vaccination programs ongoing and the disease and effective treatments better understood, we should be able to establish a new normal at some point in 2021. There are myriad challenges, but the path is beginning to emerge.”

Among the fiscal challenges the state must face is the funding of HB 3. The cost of the bill was $6.5 billion when it was enacted but programs within it and built-in property tax reductions promise to make it more expensive to maintain. One such program is the optional Teacher Incentive Allotment (TIA) which provides financial incentives to teachers with a stated goal of reaching a six-figure salary. While the goal of the TIA seems admirable, it is difficult to determine state costs since districts must opt in. Additionally, districts that don’t opt in may find themselves in need of funding to provide allotments to teachers hired from another school district, as the funding follows the teacher. With TIA only partially implemented some school officials are calling for more flexibility within the program to make it work.

The shifting of property taxes also increases the state’s funding obligation. HB 3 compresses the 2020 school district maintenance and operations (M&O) tax rate by seven cents resulting in a local tax rate of 93 cents for every $100 of property valuation. According to Chandra Villanueva with the non-profit organization Every Texan, “Beyond 2020, if statewide property values grow by more than 2.5 percent, HB 3 will cut even further into the Tier I M&O rate statewide, threatening public education. Every time the M&O tax rate drops, the state must come up with additional funding to replace the lost funding…”. These provisions can lead to increased state obligations and place additional strain on the ability to fund the cost of HB 3.

In spite of these challenges, many lawmakers seem committed to funding HB 3. In his acceptance speech last week, the new Speaker of the House of Representatives, Dade Phelan said, “We’re gonna do our best to make sure our commitment to public education is strong. “When you go look at your personal budget…whatever I spend the most money on is the most important thing,” Phelan said. “And the most important thing here in Texas is education.” Both Chairmen of the education committees in the Texas House and Senate have made similar commitments to funding schools this session, but the availability of revenue continues to be the problem.

One place that the legislature could get money for HB 3 would be the Economic Stabilization Fund, often called the “Rainy Day Fund”. This fund currently contains $10.5 billion and, if untouched, is expected to reach $11.5 billion by the end of 2022-2023. Another source of revenue is recent federal stimulus dollars which should put a significant amount into state coffers. The current revenue estimates don’t account for the 5% cuts state leadership advised to agency heads last year and there could be increased economic activity which creates more revenue than anticipated. “In any case,” according to Hegar “the Legislature will again face some difficult choices to balance the budget. While savings from agency spending cuts and federal funding could help erase the projected shortfall for this biennium, a substantial supplemental appropriations bill could increase it, thereby reducing revenue available for the next biennium.”

Wherever the Legislature gets the funding and whatever flexibility to districts they provide within the implementation of HB 3, they do have a substantial obligation to fund the bill. There are nearly 5.4 million public school children in Texas depending on them and they deserve the best education we can provide. From the speeches given by multiple legislators it seems that they are taking this obligation seriously. Let’s hope their votes this legislative session reflect it.