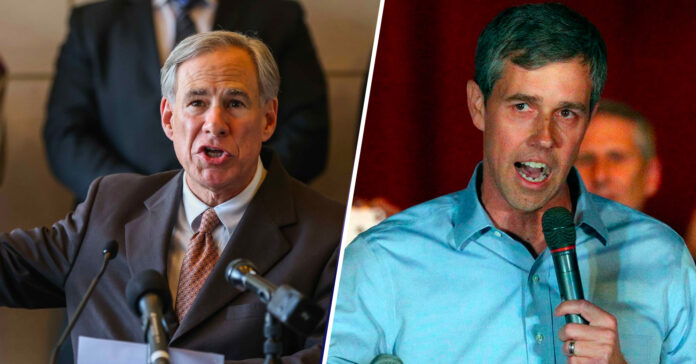 Texas’ next election is still almost one year away, but the race to become the next Governor of the Lone Star State is starting to heat up.

In a poll released on Monday by the Texas Hispanic Policy Foundation, two-term Republican Gov. Greg Abbott and the most-likely Democratic challenger, Beto O’Rourke, are in a virtual tie, with the latter still unsure if he’s even running in 2022.

The GOP candidate, Greg Abbott is leading Beto O’Rourke by 44 percent to 43 percent among Texas voters who went to the polls in 2020, with the remaining voters undecided or backing third-party candidates.

Inside the GOP, Greg Abbott has a 51-percentage-point advantage among the most likely Republican voters in the governor’s primary that will take place on March 1. Allen West, the former state Republican chairman, is in a distant second place, behind Abbott by 64 percent to 13 percent. Don Huffines, a former state senator, gets 5% of the vote, while Chad Prather, a conservative pundit, and comedian, has 3%. Another 15% were undecided about their choice.

Gov. Abbott has continued to push Texas politics to the right, with aims of consolidating support inside the GOP and ensuring himself a strong performance in the Republican Governor’s Primary. However, this hard shift into far-right politics may be hurting his chances among moderates in the GOP and independent voters.

“Much can happen over the course of the year, but these numbers show that not only can we expect a competitive general election, but that Abbott’s shift to the hard-right may have imperiled his governorship,” commented Villalba, a former center-right GOP state representative from Dallas.

Beto O’Rourke is commanding a strong movement inside one of America’s most conservative states. In the poll, 36% of the respondents identified as Democrat, and only 33% as Republican. Excluding independents, who generally lean Republican in Texas, the sample’s partisan identification is 43% Democratic, 43% Republican. An impressive tie in a state that hasn’t had a Democrat in office during the 21st century.

One area where Beto has excelled is among Hispanics. With a surprising lead over Gov. Abbot with a 49%-31% lead, anchored in a 27-percentage point lead among Catholic Hispanics. O’Rourke has a strong and large network of contacts that could help him raise enough money to beat Abbott. Still, the question remains, will he run?

The Best Signs from the Beto O’Rourke Reproductive Rights Rally in...