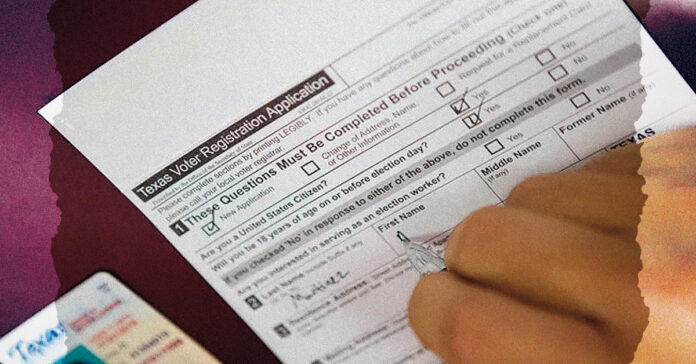 Before the Republican-controlled Texas Legislature passed a restrictive new voting measure last year, Molly Broadway was adept at navigating the state’s voting landscape. She had spent six years with Disability Rights Texas, an Austin-based nonprofit, specializing in advising voters on how to cast their ballot (regardless of party affiliation).

That same confidence is hard to find nowadays. As the state’s first election after the passage of Senate Bill 1 looms, Broadway is dogged by uncertainty. SB 1 was a backlash to the pandemic-era accommodations several counties—especially Harris County—instituted in 2020, which saw record-high voter participation rates. The law prohibits counties from proactively sending mail-in ballot applications or implementing 24-hour voting and drive-thru voting. It also creates a slew of requirements for mail-in voting applications.

“We’re trying to answer their questions and provide as much information as we can, as it’s being made available to us, but it can be challenging,” Broadway said. “And people have a lot of questions and concerns about it.” She said the changes introduce an “intimidation factor” for potential voters that could turn some off from voting at all. “Unless you are paying attention to this issue day in and day out, it is easy to get swept up by it,” she said. At the same time, newly gerrymandered political maps in Texas appear to water down the voting power of people of color, despite the fact that they made up 95 percent of the state’s population growth in the last decade.

Some voters have already been caught up in the new restrictions’ dragnet. Travis County has reported a 27 percent rejection rate of mail-in ballot applications, while Harris County reported turning back 14 percent. Harris County also recently reported rejecting nearly 40 percent of ballots themselves. Under SB 1, both applications and ballots can be rejected if the aspiring voter does not provide an ID number or provides an ID number that does not match their voter registration record, which can cause problems for voters who may know what number they used in the past. The deadline to apply for mail-in primary voting is Friday; early voting is ongoing.

The requirement is especially troublesome for voters who need assistance to apply and cast their ballot, such as the disabled. Voter assistants must fill out and turn in an additional form with their name, address, relation to the voter, and an oath to an election officer. The assistant cannot be compensated by the person they are assisting. Broadway worries this will complicate how paid caretakers, attendants, and nurses can help their patients fill out a ballot. “If I was in those shoes, I would not want to sign it simply for, you know, ‘I’m not getting paid enough to risk this kind of legal trouble.’”

Jen Ramos, a political specialist with Jolt Action, said university students can also cast mail-in ballots if they wish to stay registered in their home counties and can’t make it home for the election. Like Broadway, Ramos tries to help by informing them of the law. “We are hoping to be able to make them feel confident enough to stand up for their ability to participate in voting,” Ramos said.

On college campuses, several student groups are actively engaging and registering their peers to vote. Kerry O’Malley Gliem and Joseph Kudler are co-directors of Hook The Vote, a civic engagement organization with the University of Texas at Austin student government. They started a voter registration competition with student organizations from universities across the state to encourage more younger voters to engage their campus communities. Gliem said it is already hard for students to stay engaged in politics in between classes, jobs and internships, but SB 1 is going to make it even more difficult. The University of Texas campus has two voting locations, despite having almost 52,000 students. Students sometimes must wait in line for hours. As the primary elections grow ever closer, Gliem is faced with a daunting task.

“I feel like the burden for empowering students, as a result of this kind of legislation, falls upon organizations like mine and other student civic engagement organizations,” Gliem said. “And that is a pretty big burden to bear in a state so influential to national politics and a state pretty politically polarized like Texas.”

All three organizations are gearing up to handle the general election in November, but, as Broadway and Gliem said, the burden seems to be falling more on their shoulders to make sure citizens vote. Only time will tell whether pro-democracy advocates can overcome the state’s latest voting crackdown.