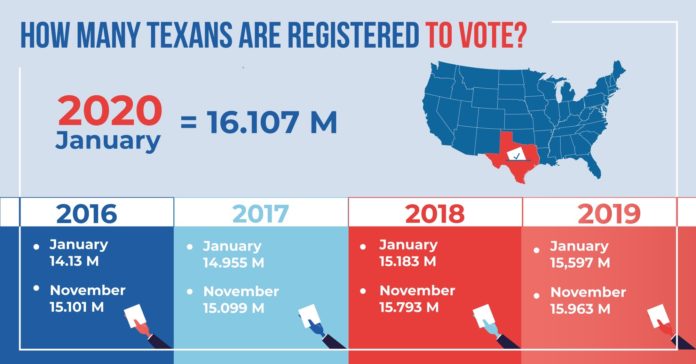 There are an estimated 16.1 million Texans who are registered to vote in March’s upcoming primaries, according to the office of the Secretary of State’s most recent January reports.

That number represents nearly 75 percent of Texas’ voting-age population and nearly 1.8 million more Texas voters than were registered in March of 2016. This includes a 857,000 increase in voters since the November gubernatorial elections in 2018.

Such a stark increase in the state’s total number of registered voters can be attributed to rapid population growth, specifically within Texas’ metropolitan areas.

The registration increase seems to be mostly visible in Austin’s two surrounding counties, Williamson County and Hays County. The technology hub has seen a large surge in population growth over the past decade and this is reflected in the two county’s voter registration rates.

Hays County, which is located just south of the city, has seen a 31 percent increase in their total registered voting population.

Williamson County, just north of Austin, runs a close second with a 26 percent increase in their total registered voting population.

Despite the overall growth in Texas’ registered voter population, what it all comes down to, however, is turnout. Texas historically has been a low voting state. Even with 2018’s record breaking turnout, the state still ranked toward the bottom in voter participation.

With the increase in voter registration, it still remains to be seen how the new electorate will vote come March 3. The primaries will show the partisan makeup of Texas’ new voting population.

Early voting for the presidential primaries begins on February 18 and will run through February 28, Election day will be on Tuesday, March 3.
Find more resources at the Secretary of State’s website linked here.