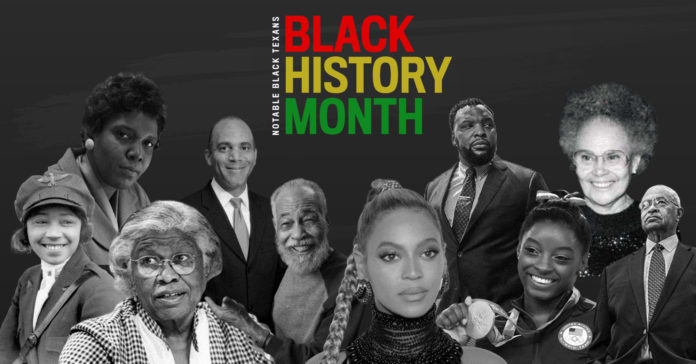 This month is Black History Month, and today, Reform Austin is honoring some of the most remarkable Black Texans.

When Coleman decided she wanted to become a pilot, the combined discrimnation of her race and gender necessitated her relocation from the United States to France where she could pursue her dream.

Coleman has not been forgotten in nearly a century since her death in 1926.

Even if you were not aware of the fact that Barbara Jordan became Texas’ first ever Black state senator in 1882, and the first Black congresswoman from the South, her impact is still felt to this day. As an educator and a lawmaker, this Houston, Texas native and Texas Southern University alumnus fought for the rights of all Texans.

In her life, Jordan served as a special counsel on ethics for Gov. Ann Richards, spoke at the Democratic National Convention, and led the Commission on Immigration Reform under Bill Clinton. It is hard to measure the extent of her impact on the state, but her life and legacy is one that can not be overlooked.

She gave a powerful speech while on the House Judiciary Committee during the impeachment inquiry of President Richard Nixon.

A persuasive orator and boundary pusher, Barbara Jordan will be remembered for fighting to build America as promised.

Hattie Mae White holds a spot in Texas history as the first African American to win a seat in a Texas public office since Reconstruction, the rebuilding period following the Civil War and the abolition of slavery.

A mother of five children, Hattie Mae White decided to run for the City of Houston’s Independent School District board in 1958 and served on the school board for nine years. During her time on the school board, White championed for desegregation and racial equality amidst violent discrimination.

While not many Texans may know the name Hattie Mae White, her bravery and extraordinary efforts have impacted the lives of many of Texas’ children.

The granddaughter of slaves, Juanita Craft dedicated her life to the elimination of racial discrimination in Texas.

Juanita Craft was a monumental and tireless leader in the Civil Rights Movement in Texas and served as a chair member of the NAACP,  having a hand in opening over 180 rural NAACP chapters.

In her life, Craft successfully demonstrated against the then segregated University of Texas Law School and North Texas State University, served as a delegate to the White House Conference on Children and Youth, and at age 73 she was elected to the Dallas City Council where she spent her time working to improve the status of Hispanic and Native Americans.

In her lifetime, Juanita craft became the first African American to vote in Dallas County in a public election, and became a publicly elected official later in her life.

Curtis Graves was the first African American to serve in the Texas House in the 20th century. Graves made history by being a brash and imposing politician who was not to be deterred.

At age 27, Graves had already had a large impact on Texas, having a hand in the integration of Houston’s lunch counters, theaters, and restaurants. Additionally, he became acquaint ed with local business leaders while managing a bank in Houston’s Fifth Ward.

He arrived at the Texas Legislature hoping to facilitate change. Prior to Graves’ election in 1967, the only other African American legislator to serve in the House was Robert L. Smith in 1899.

As Graves once said in an interview to the New York Times, the role of Black legislators at the time were to be “educators, not legislators. That’s about all we can do at this stage.”

Jefferson has earned numerous awards including both the Texas Center for Legal Ethics Chief Justice Jack Pope Professionalism Award and the Texas Appleseed J. Chrys Dougherty Good Apple Award in 2014. He also was awarded the Anti-Defamation League Austin Jurisprudence Award in 2015. In 2016, the University of Texas awarded him the Presidential Citation award.

Wallace B. Jefferson Middle School in San Antonio, Texas is also named after him.

One of the world’s most powerful and influential musicians, Beyoncé, a Texas native, increased the visibility of contemporary Black life and black feminist equality.

In 2016, she dropped her hit-single turned Black anthem “Formation” during Black History Month and has been outspoken about the importance of this month.

Simon Biles broke the record for most world championship gold medals and most national all-around titles won by a female in gymnastics, Biles is one of the most powerful competitors in the sport today.

Biles had emerged as a powerful force for change within the governing body of USA Gymnastics in the wake of the Nassar sexual-abuse scandal. While Biles was hardly the first and only person to publicly speak out against him, her prominence in the sport garnered more attention and pulled more weight to the need for systemic change.

Biles’ prestige in the sport and her willingness to speak out against injustices elevates a brighter future for all.

After receiving a call from Texas Southern University (TSU) to teach philosophy, Thomas Freeman had every intention of returning to Mount Carmel Church in Richmond, Virginia. However, once he started as TSU’s debate coach and was building a team that beat some of the top teams in the nation, Thomas Freeman’s trajectory changed dramatically.

Dr. Freeman taught everyone from Dr. Martin Luther King, Jr. to Barbara Jordan, and had a tremendous impact on their lives.

“I cannot overestimate the impact and influence Dr. Freeman had on my life,” said Barbara Jordan, the first Southern black woman elected to the U.S. House of Representatives.

Dr. Freeman taught at TSU for 7 decades and the impact he had on the students and the world is intangible.

Dallas lawyer S. Lee Merrit is considered by many to be one of the county’s premier civil rights lawyers and was responsible for bringing the Black Lives Matter movement to the courtroom.

Merrit’s position in the national spotlight has caused many African Americans in Texas to seek him out when facing issues with the police.

Despite the extreme opinions leveled towards him in his political stances, Merrit has played an important role in the black community by providing hope for many and further expanding the conversation of race in America.