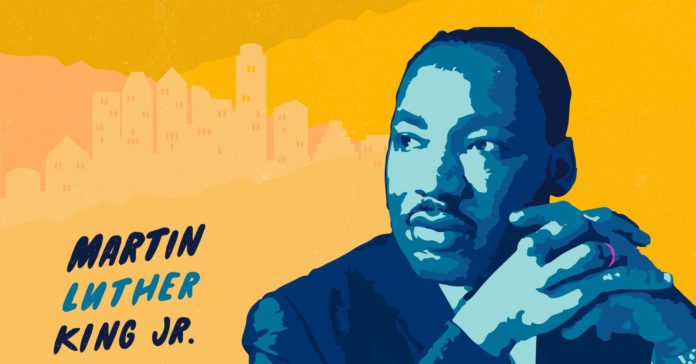 Although the UT President initially approved the sculpture, lack of funding meant its construction was put on hold. It would take seven years until a student referendum determined that students would pay a dollar each semester for four years, raising $500,000 for a statue. The artists Jeffrey Varilla and Anna Koh-Varilla were commissioned, and the sculpture plans came to life, creating a meeting space where current university students continue to honor his legacy.

Over a century after his death on April 4, 1968, his powerful words and peaceful protest movements still resonate.

Martin Luther King Jr. Day is an occasion to reflect on the issues he was passionate about, along with legislation he would be proud of today. His dream of race and class unity continues through proposed laws to address the issues of equality, workers rights, poverty, discrimination and racial justice.

His American values are remembered in a press release commemorating the legacy of Dr. Martin Luther King Jr., from The University of Texas System in 2019. It states, “Dr. King’s words and deeds continue to inspire us, a half century after his death. But equally important, his teachings provide a sobering reminder of the distance between the values we share as Americans and the day-to-day reality for too many of our neighbors…there is more work to be done to ensure that all Texans have access to a great education and the opportunities it makes possible, and we are committed to that important goal.”

Martin Luther King Jr.’s actions for social progress helped pass the Civil Rights Act of 1964 which was signed by President Lyndon B. Johnson. The law “created the Equal Employment Opportunity Commission to address race and sex discrimination in employment and a Community Relations Service to help local communities solve racial disputes.” The law banned segregation of schools, public swimming pools, parks, and other public places, and it “restricted the use of literacy tests as a requirement for voter registration.”

When King was awarded the Nobel Peace Prize in 1964, he gave his prize money to the civil rights movement and said, “Sooner or later all the people of the world will have to discover a way to live together in peace.”

During a visit to Stanford University, a year before he died, he spoke about social and economic equality and said, “Somewhere we must come to see that social progress never rolls in on the wheels of inevitability. It comes through the tireless efforts and the persistent work of dedicated individuals.”

In early April of 1968 he arrived in Memphis to support city sanitation workers and their poor working conditions, where he was later assassinated at the hotel where he was staying.

Martin Luther King Jr.’s death brought an outpouring of grief nationwide and people from all walks of life were shaken following the loss of a man who dedicated his life to reminding people to understand each other with compassion, to be courageous and to unite in peace.