Home Campaign Finance The 10 Most Vulnerable Republican-Held House Districts Are Shaping Up to Be...
Facebook
Twitter
Email 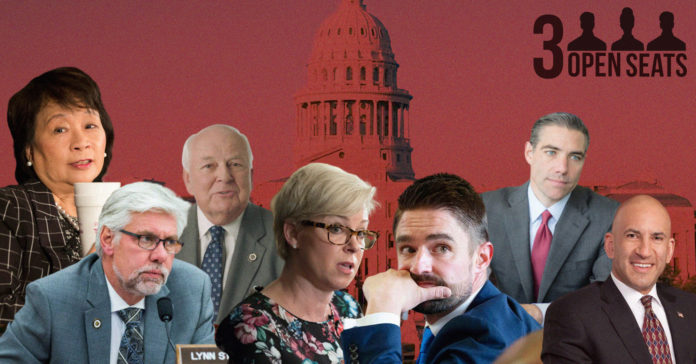 Last September, Reform Austin reported on the top 10 most vulnerable Republican-held districts in the Texas House. Since then, three of the incumbents — State Reps. Dwayne Bohac (R-Houston), Bill Zedler (R-Arlington), and Rick Miller (R-Sugar Land) — have announced their retirement, making the races for their seats even more competitive than before.

With the final ballots set for the 2020 races and new campaign finance reports out, the following races are shaping up to be pretty expensive.

As one of the top Democrat targets in 2020, Morgan Meyer raised an impressive $321,000 and spent $119,000, outraising all three of his Democratic opponents. He also outraised the other nine incumbents in the top 10 most vulnerable Republican-held districts. Heading into 2020, Meyer has $396,000 in cash on hand.

State Rep. Angie Chen Button outraised her 2018 Democrat challenger Brandy Chambers $275,000 to $87,000 in the last fundraising period. With $772,000, Button maintains the largest war chest of all of the incumbents in the top 10 vulnerable Republican-held districts. Chambers, meanwhile, maintains $72,000.

Chairwoman Sarah Davis outraised her two Democratic opponents with $90,000. She also spent $76,000 and maintains a war chest of $231,000 heading into the election year.

State Rep. Lynn Stucky substantially outraised his Democratic challenger Angela Brewer with $165,000. He also outspent Brewer with $147,000 and maintains a war chest of $164,000.

In the race to replace Dwayne Bohac, the fundraising leaders were activist Lacey Hull in the Republican primary and attorney Josh Wallenstein in the Democratic primary. With $50,000, Hull has raised the most of the six candidates. Wallenstein is not far behind with a fundraising haul of $42,000. He also spent the most with $36,000 and has $52,000 in the bank going into 2020. Meanwhile, Hull has $46,000.

At the time of publication, there was no report available for Democrat primary candidate Jenifer Rene Pool.

David Cook, the Republican candidate who led to Bill Zedlers’ eleventh-hour retirement, raised an astonishing $145,000 in the half-month since he opened his campaign account. He has $319,000 in his war chest heading into 2020.

Democrat Rish Oberoi led the fundraising pack in the last six months with $53,000 in donations and $47,000 in cash on hand. Oberoi faces three other Democrats in the primary, including Dr. Suleman Lalani, who raised $41,000 and loaned his campaign $90,000. Lalani has the biggest war chest heading into early voting with $91,000. State Board of Education member Lawrence Allen raised $21,000, and perennial candidate L. Sarah DeMerchant has raised $7,000.

With $26,000, Republican Jacey Jetton has raised the most amongst the three Republican candidates in the race. He also loaned his campaign $30,000 to help him have the second-largest cash on hand advantage of $55,000 — the highest amongst Republicans. Insurance consultant Matt Morgan raised no money, and analyst Leonard Chan raised $8,000.