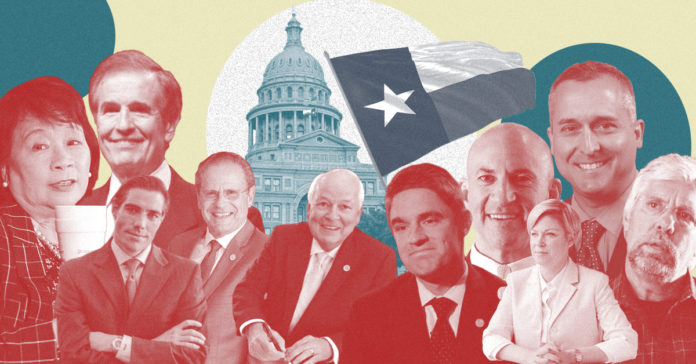 With upcoming elections in 2020, all eyes are on the Texas State House. For all the talk of Texas potentially going purple, some legislative seats are more politically vulnerable than others.

Reform Austin analyzed each state House district and identified the following as the most likely to flip in 2020, based on district data and returns from the 2018 election.

Summary: As the representative with the tightest margin in the last election (just 47 votes, prompting a recount), the Houston-based consultant and real estate agent has already received help from Republican colleagues for a 2020 campaign. The Beaumont Enterprise reports that Bohac “received about $27,000 in campaign contributions, almost $20,000 of which came in the form of polling donated by [House Speaker Dennis] Bonnen.”

In the past, Bohac faced scrutiny for his campaign contributions, including in 2010, when he was caught up in a federal money-laundering prosecution after it was discovered he received tens of thousands of dollars in illegal donations from former Congressman Tom DeLay.

Bohac also sided with the insurance industry against Texas homeowners, when he co-authored a House bill to prevent property owners from suing insurers over storm claims, though he mentions on his website that as “a lifelong resident of District 138…[he] knows first-hand that flooding is one of our community’s deepest concerns.” A similar bill in the Senate was strongly promoted by Texans for Lawsuit Reform, Bohac’s largest legislative donor over time, with over $200,000 contributed to his campaigns.

Summary: Freedom Caucus member Rep. Matt Shaheen narrowly won his last election, which could be a sign constituents in the district, like many in Texas, are looking for moderate legislators rather than hardline conservatives.

Shaheen created controversy this year by authoring a bill to “expand employment opportunities by eliminating necessary occupational licenses,” Shaheen attempted to deregulate the cosmetology industry by no longer requiring cosmetologists and barbers to be licensed by the state.

Industry professionals warned the bill would put customers at risk, because untrained cosmetologists might poke someone’s eye out trying to dye eyelashes, nick a vein while giving a shave or burn a scalp while bleaching hair. In the face of broad pushback, the bill did not receive a hearing and never received a vote.

In 2017, Shaheen tried to dismantle the Texas Film Commission as wasteful, even though the industry is responsible for generating more than 153,000 jobs and $1.3 billion in total production investments in Texas.  For every dollar invested in the Commission, the state sees $5.33 in additional spending by the industry – a tremendous return on investment.

While Rep. Shaheen claims to support limited government, he does it in ways beneficial to his special interest contributors, consistently seeking to undermine consumer protections to benefit big corporate interests.

Summary: After facing no challenger in 2016, when Hillary Clinton won the district at the Presidential level, Meyer narrowly defeated Democratic challenger Joanna Cattanach in 2018. According to the latest campaign finance reports, Meyer appears to know he is a top target, focusing on fundraising shortly after the legislative session. Meyer raised $155,595 in June, much of it from large contributions from conservative PACs and wealthy business owners.

In representing a Democratic leaning district, won by Clinton in 2016 and Beto O’Rourke in 2018, Meyer tries to play the moderate role, but he’s toed the line on many divisive and conservative votes in the House. In 2017, Meyer voted for a failed bathroom bill which divided the business community and tourism industry, and Meyer has advocated against Texas’ “Robin Hood” school finance system which redistributes local property taxes poorer school districts across the state to equalize education funding.

As Chair of the House General Investigating Committee, Meyer kicked the can on the so-called “Bonnghazi” scandal involving Speaker Dennis Bonnen and other members of the state Republican establishment, by referring the investigation to the Texas Rangers.

Summary: With over $500,000 in her campaign account, it will be difficult for challengers to outspend Chen Button in the next election. It’s worth noting that Chen Button’s donors have drawn scrutiny in the past for their connections to state officials, like site selection consultant Ryan LLC, which profits from Texas incentive programs.

In the last legislative session, Rep. Chen Button proposed a bill that would ultimately maintain a corrupt affordable housing tax credit system that resulted in bribery cases against elected officials.

Like many of her Republican colleagues, Chen Button voted against Medicaid expansion, and said at a Texas Tribune panel that it was politically toxic to her and other Republicans, though surveys show that in Texas there is a bipartisan consensus in favor of the policy.

Summary: After narrowly winning re-election, Jeff Leach left the extremely conservative Freedom Caucus at the start of 2019 legislative session, suggesting he’s learned public displays of moderation could be key to keeping his seat.

The problem for Leach is his actions undermine his attempts to rebrand his political image.

In what many considered a stunt this last legislative session, Leach authored a bill that “would penalize doctors who don’t give full medical treatment to babies born alive after abortion,” according to the Texas Observer. But there are no reported cases from the state that this has occurred, and the federal Born-Alive Infants Protection Act of 2002 already extends legal protection to infants alive after an attempted abortion.

His previous authored legislation to limit the expansion of Medicaid in Texas suggests that Leach is against assisting lower-income mothers and babies that would be eligible for coverage under a Medicaid expansion.

Leach is also closely tied to other establishment conservatives.  In 2016, the Dallas Morning News obtained text messages between Leach and a group of Collin County lawmakers as they debated whether to intervene in Ken Paxton’s legal woes by cutting funding for legal services in the case.  This effort, which some have construed as obstructing justice, shows how Leach puts party politics above the public interest.

Time in office: First elected in 2003, Zedler was temporarily unseated by Democrat Chris Turner from 2009 to 2011 and regained his seat after redistricting created more favorable lines in 2012.

Summary: One of the House’s more anti-science members, Rep. Zedler is known as an “outspoken anti-vaxxer” and the only Texas lawmaker with an A++ rating from the Texans for Vaccine Choice Group.

Zedler claims his anti-vaccination position is about “choice” and “smaller government,” but public health experts warn these politicians are putting the health and safety of Texans at risk

Zedler has also erroneously claimed antibiotics could treat measles, a viral disease, instead of vaccines, and in a Facebook post Zedler shared in June of this year is any indication, he also believes evolution is not possible.

General arguments against science might make a politician seem a little outside the mainstream, but when they impact the public at large, the public can’t ignore it.  Zedler’s extremism is sure to be a campaign issue in 2020, particularly on the heels of multiple measles outbreaks this year.

Summary: Largely expected to be Gov. Greg Abbott’s pick for Commissioner of the Texas Department of Family Protective Services (DFPS) when the position opens in September, Rep. Miller insists he is “fully committed” to an upcoming 2020 election campaign.

Since he was elected in 2012, Miller has consistently voted against children and families, including voting against increasing special education programs, free breakfast programs, and against funds for childcare for at-risk high school mothers.

Miller also waded right into the Texas culture wars, filing a bill in 2015 to roll back rules passed in all of Texas’ largest cities on the use of restrooms. His son Beau, a commercial litigation and product liability attorney and gay activist, said in response, “My dad wants people to be able to have the opportunity to discriminate against his own son.”

Summary: Davis has held on to her seat by being the most center-left Republican in Texas.  She is the only pro-choice Republican in the Texas House, and her moderate politics serve her well in a district in the heart of Harris County.  Both Hillary Clinton and Beto O’Rourke won this district by double digits.

Though Davis will – on rare occasion – vote across party lines, her top donors are among the more powerful special interests in Texas. Davis’ top donor, Texans For Lawsuit Reform, has given her over $468,000 since 2011. Months before Hurricane Harvey, Rep. Davis co-authored the House version of a bill to prevent property owners from suing insurers over weather-related claims.

Following massive education cuts in 2011, Davis falsely claimed in a mailer that Republicans did not cut $5.4 billion in education funding, a statement that would be labeled “Pants on Fire” by Politifact. Davis’ vote for this bill eliminated a grant program that funded pre-K.

HD-134 is the most Democratic seat held by a Republican in the Texas House, and Davis will have to work hard to hold the seat in a Presidential cycle.

Prior to becoming a member of the Texas House, reporters uncovered irregularities with Stucky’s veterinary practice, including an incident leading to the suspension of his veterinary license. The North Texas Daily reported that “Stucky was placed on probation for most of 2011 after the Texas Board of Veterinary Medical Examiners found he was giving out medication without fully diagnosing the patients. And in a 2010 report by CBS 11 found “Dr. Lynn Stucky unnecessarily euthanized hundreds of family pets at the Sanger animal shelter.”

Stucky’s record shows he isn’t only bad for animals, but for taxpayers. He voted for prohibiting local governments from regulating new construction contracts, siding with the industry who has donated over $26,000 to his campaign.

Summary: Following in the footsteps of retired predecessor Joe Straus, Allison won his Republican primary with Straus’ endorsement and entered his first legislative session at a time when moderate politics and bipartisan bills led some to call it a “no drama” very “humdrum session.”

But after the session, Allison was attacked in an alleged dramatic incident involving House Speaker Dennis Bonnen and far-right conservative Michael Quinn Sullivan. Sullivan published a blog post recounting a June 12 meeting with Rep. Burrows and Speaker Bonnen where he alleges they planned to target a list of Republicans in the 2020 primary elections, which included Allison.

Allison largely voted along party lines against bills like Medicaid expansion, and against a bill that would prohibit an employer from keeping employees’ tips, so it’s a bit of a surprise Bonnen turned so vehemently against Allison.

Though Allison won his district by a healthy margin in 2018, the longtime Republican district voted for Democratic challenger Beto O’Rourke over U.S. Sen. Ted Cruz by 0.4%, which shows the district is capable of turning that elusive purple.