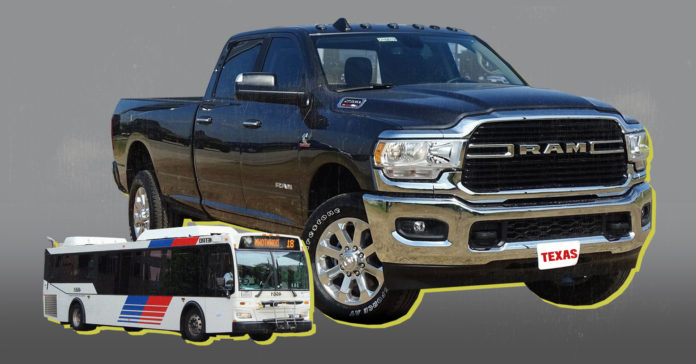 W.F. Strong, a professor in the department of communication at the University of Texas Rio Grande Valley-Brownsville, told a story about a British couple he recently had breakfast with. It was their first time visiting the Lone Star State. The wife, a member of the English nobility, shockingly observed that Texas had a prodigious amount of sizable pickup trucks devoid of cargo. In England, pickups aren’t so common, and they all carry cargo, she explained to the professor.

Strong said, “I told her ours carried cargo too—windmill fuel. She enjoyed my joke, but nonetheless, her point did illustrate clearly that we do enjoy a unique truck culture here that is startling to the outsider.”

While England is arguably the birthplace of mass transit, or public transportation, France manages 57 tram lines (as of 2014) that run throughout the nation connecting large and medium samples of humanity and “carry some 3 million passengers a day,” according to City Lab. This high-speed train infrastructure was completely built in the last three to four decades.

The country that co-engineered the iconic Concorde airliner and developed the TGV high-speed rail is roughly the same size as Texas.

“This is Texas. People have pickup trucks and want to drive cars,” said Kyle Workman, the president of Texans Against High-Speed Rail, in a City Lab article.

That’s hard to argue with. A paper issued in 2011, which included researchers from the University of North Texas and the University of Texas at Arlington, demonstrated the resilience of truck and automobile culture in the context of the creation of public transportation systems in Dallas reported the Dallas Observer in 2016.

The research included interviews with city residents who lived in areas constructed for transit use, yet those people were less likely to use the public transportation accessible to them. Some interviewees’ comments published in the Observer were “Cars are much faster than trains,” and “I don’t want to take the time to learn how to use the system; too complicated.”

Strong believes a deeply embedded attitude of independence is what sparks a reaction to anything that is perceived as a threat to cultural autonomy.

“Texans, though mostly urban by a long shot, have a rural mindset,” Strong commented. “Many of us, at least in attitude, are still on the vast prairies of old, living largely solitary lives on the frontier. Cattle drives only lasted about 10 years, but we still identify with the fierce independence and freedom of the cowboy.”

Prior to World War II, mass transit was not publicly underwritten and soon became associated with profit-making privatization, said Kyle Shelton, deputy director at the Kinder Institute for Urban Research at Rice University, in an interview with Reform Austin. He further noted that this paved the way for highway and roadway projects to be built with generous infusions of public money due to the escalating popularity of automobiles.

“It was always seen as a public good,” he said. And justified in Texas as a means to connect rural markets — “Get the farmer out of the mud” — and the argument was thought to be a no-brainer that highways were a public necessity that needed to be publicly funded.

“And there’s no denying for most Americans, not just Texans, as soon as automobiles were available they became a very sought after kind of amenity,” Shelton continued. “They brought a new wealth of changes that made people’s lives more convenient, like any number of other machines.”

The centuries-old intense attitude of individual sovereignty that persists isn’t leaving the state anytime soon. As to why mass transit, and even car-pooling, are difficult sells in Texas, Strong said, “Such things belie our collective self-image.”

Shelton said when you consider Texas cities such as Houston, Dallas, San Antonio and Austin — that have hungrily and indiscriminately seeped outward consuming land — contain substantial public transit systems whose service seems inferior when considering the latitude a truck or car offers a commuter or traveler.

“Car culture is an important part of American identity, and overcoming that is difficult. It’s also backed up by all sorts of other things like advertising and…salesmanship from car companies,” Shelton expressed.

He said people are more inclined to purchase vehicles since mobility-means and infrastructure cater to trucks and cars, adding that automakers earn much more money from trucks and SUVs than cars.

“We may not all have horses, but we care about horse power. Just as in the old days, we still don’t care to ride double,” Strong said. “Everybody needs the self-reliance of their own transportation.”