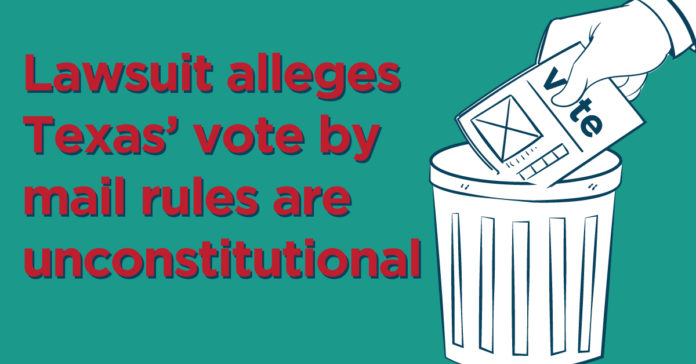 The Texas Civil Rights Project filed the suit on Aug. 7 in San Antonio on behalf of two Texas voters who had their ballots rejected.

Election officials threw out George Richardson of Brazos County and Rosalie Weisfield of McAllen’s ballots over questions about their respective signatures, alleges the lawsuit.

Signatures on absentee ballots became a hot-button issue in the last election cycle because of a 2017 law, known as SB 5, which allows election officials to refuse mail-in votes if the signatures on the ballot and the envelope holding the ballot don’t match.

Lawmakers described SB 5 as another way to prevent voter fraud.

When the law was shotgunned through the Lege’s first special section of 2017, no one thought to spell out the standards that should be used to determine if a signature is or isn’t legit.

This lack of guidance is leading “untrained local election officials” to “eyeball” signatures, according to the lawsuit. The Texas Civil Rights project goes on to say that local election workers are “arbitrarily and subjectively” rejecting ballots.

The lawsuit claims that the “idiosyncratic” way SB 5 is applied in each of Texas’ counties violates the Fourteenth Amendment, the American with Disabilities Act and the Rehabilitation Act.

Part of the problem with the signature verification law is that people with disabilities “are likely to have variations in their signatures from one writing to the next,” according to the lawsuit.

Because 2018 was the first election under this signature verification law, it’s impossible to tell exactly how widespread the problem was, but the Texas Civil Rights Project estimates that more than 1,800 people had their ballots rejected.

Without a statewide tally of rejected absentees, it’s impossible to know exactly how the signature verification law was being applied across county lines.

If the lawsuit’s claims turn out to be true, then roughly 0.5% of Texas’ 360,000 absentee ballots were rejected last election. While 360,000 may seem like an impressive number, it’s worth noting that in a June 2018 election, about 12 million Californians opted to vote by mail.

Absentee ballot numbers in Texas are artificially depressed because the state places onerous restrictions on who can cast ballots by mail.

In Texas, absentee ballots are limited only to people over the age of 65, people who won’t be in their county of residence on election day or during early voting and people incarcerated but still eligible. Everyone else has to vote in person.

This strict approach to voting by mail has led to non-profits groups that help college students and active duty military personnel to vote to accuse the state of voter suppression tactics. Two such groups, MOVE Texas Civic Fund and the American G.I. Forum, are co-plaintiffs in the lawsuit.

Both groups allege that the signature verification law puts an undue burden on them by requiring additional resources to educate voters about the new signature requirements.

Because the lawsuit was only filed on Aug. 7 it’s too early to say how it will affect Texas’ elections. What can be determined is that by making absentee ballots the sole province of the old, the infirm, the traveler and the prisoner, Texas is putting the kibosh on something shown to increase voter turnout.

Over the last 20 years, multiple studies have shown that vote by mail, or vote at home as it is sometimes called, increases voter participation by anywhere from 0.6% to 30%. One example from Nebraska showed that when Garden County decided to hold a May 2018 election exclusively by mail, voter participation reached 58%, more than double that of the rest of the state.

It almost seems the lesson here is that if a government wants more people to vote, it should make voting easier, not harder.