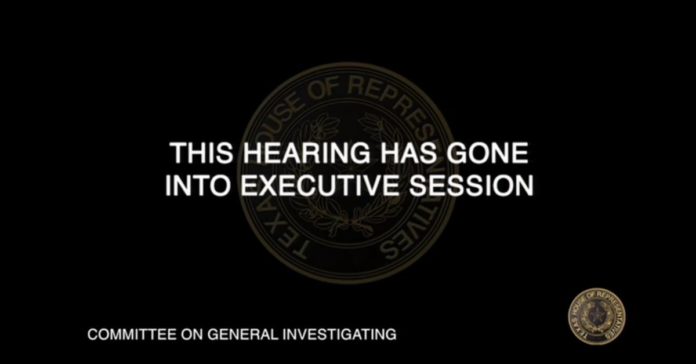 This morning, the Texas House General Investigation Committee was expected to hold a public hearing that would launch an investigation into allegations against House Speaker Dennis Bonnen (R-Angleton).

Bonnen has been charged with violating numerous election laws after allegedly meeting with Empower Texans’ hardline conservative leader, Michael Quinn Sullivan, and providing him with a list of Republicans to target in primary elections. Sullivan alleged Bonnen would ensure his publication, Texas Scorecard, would receive media credentials in exchange for spending money against the House members on the list.

Speaker Bonnen has since apologized for saying “terrible things” in the meeting that took place on June 12, corroborated by House Republicans that have listened to a recording of the meeting provided by Sullivan. Sullivan has not publicly released the audio recording.

The General Investigating Committee, chaired by Rep. Morgan Meyer (R-Dallas), has sweeping powers to investigate nearly all levels of government in Texas, as well as the power to issue subpoenas. In a scandal that has largely been handled behind closed doors, the transparency of a public hearing was necessary.

However, less than two minutes after the session began, the committee went into executive session, meaning only committee members were allowed to participate.

Concerns have been raised about the impartiality of the committee and its members. Chairman Meyer was promoted to his position on the committee last winter by Bonnen, and he received almost $20,000 in contributions from Bonnen during the last fundraising cycle. Another committee member, Rep. Matt Krause, also received contributions from Bonnen. For this reason, Rep. Michelle Beckley (D-Carrollton), who was allegedly insulted by Bonnen during the meeting, called for Meyer and Krause’s recusal from the investigation.

When informed of the House General Investigating Committee’s decision to go into executive session, Beckley said, “so much for transparency…This is pretty disappointing.”

In an interesting shift of responsibility, when the committee returned from executive session, Meyer announced that a motion had been passed for the Texas Rangers’ Public Integrity Unit to begin an investigation.

The Public Integrity Unit is “responsible for investigating crimes committed by state officers and state employees.” The unit is tasked with providing a copy of investigation findings to the House General Investigations Committee, which is expected in the next 30 days. Rep. Leo Pacheco (D-San Antonio), a member of the committee, says he believes the recording should be made public once the investigation is concluded.

In 2015, a state law was passed that shifted the burden of investigation of potential public corruption cases with elected officials from the Travis County public integrity unity to the Texas Rangers. If the Rangers investigate and determine further action is necessary, the case will be referred to the home county of the public official. For Bonnen, this means corruption charges would be brought by the Brazoria County DA. For Burrows, charges would be brought by the Lubbock County DA. Travis County would only maintain jurisdiction over Sullivan.

The Texas Rangers investigation isn’t the only investigation Bonnen is facing. The Texas House Democratic Party has sued Bonnen for the alleged violation of various election laws.
For the time being, “Bonnghazi” continues to unfold dramatically, and Dennis Bonnen’s future as the Speaker of the House isn’t looking as bright as it once did.