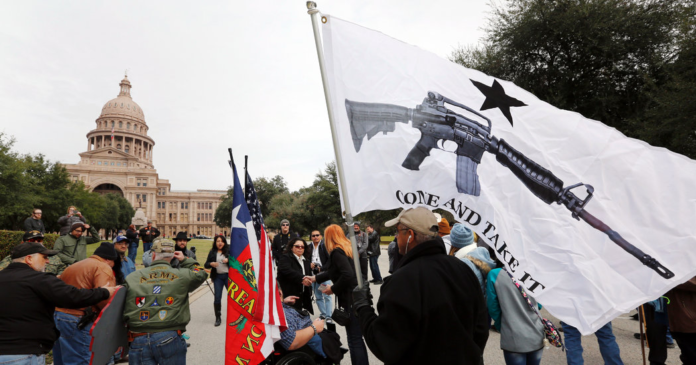 As gun violence and mass shootings continue to cause fear and panic in Texas and across the country, citizens are calling for solutions from state legislators. But the language and implementation of proposed legislation is often misunderstood by constituents, clouded by partisan agendas and a seeming divide between the right and left.

The term “red flag law” refers to state legislation that prevents dangerous individuals from owning or possessing a firearm.

These laws allow law enforcement to temporarily “confiscate guns from people found to be a danger to themselves or to others.” Though the law’s particulars vary from state to state this type of legislation allows for family members, friends, and/or law enforcement authorities to petition a state court to remove guns from individuals likely pose a threat to themselves or others. The gun restraint is often temporary, and put in place for a set amount of time. And a court petition doesn’t guarantee action; it simply allows a judge to rule based on available evidence at a hearing.

During these hearings, the individual can respond to the accusation and defend themselves. If the judge rules that an individual is a safety risk to themselves or others, the judge can order a defendant to turn over their weapons within a determined period of time, which can only be extended with an additional hearing. Red flag laws exist in some form in 17 states that span the political spectrum in terms of Democrat and Republican control.

There is currently no national red flag law or statute, though bi-partisan legislation could be announced soon.

A universal background check refers to a background check for anyone seeking to purchase a gun. Though federal law requires background checks for guns sold through federally-licensed firearms dealers—including gun stores, pawn shops, and big box retailers—that does not include private transactions between individuals in person, online, and at gun shows. For licensed dealers or Federal Firearms Licensees (FFL), required background checks are run through the National Instant Criminal Background Check System and later destroyed.

Although 90% of the public agrees that universal background checks are a good idea, no federal or Texas state law currently mandates those requirements. Texas does not require background checks for gun shows or selling online by private individuals or unlicensed vendors, which includes transferring the weapon from one owner to another.

Gov. Greg Abbott has not publicly announced plans for specific legislation related to the spate of mass shootings in the state in recent years, but has said he plans to conduct round tables that allow for expert input soon.