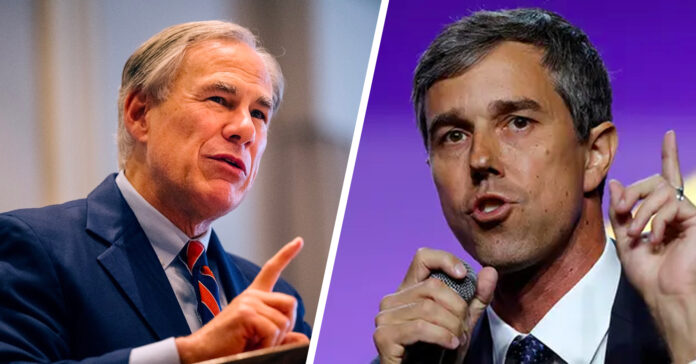 Everyone agrees that former congressman and presidential candidate Beto O’Rourke has a hard fight ahead challenging Governor Greg Abbott in 2022, but a new poll shows that O’Rourke might be gaining ground.

To be fair, O’Rourke is still clearly losing, but by a third less than he was a short time ago. The latest poll from the Dallas Morning News and the University of Texas at Tyler puts O’Rourke only six points behind the governor. In a head-to-head matchup, Abbot leads 45 percent to 39 percent, with 22 percent desiring “someone else.” This is significantly better than a UT at Austin and Texas Tribune poll published earlier this month that had Abbott ahead by nine points.

The gain probably has more to do with Abbott’s plummeting popularity than anything. Many Texans remained angry at the governor for his failure to address the problems in the electrical grid following the devastation of Winter Storm Uri. The fact that Abbott has used 2021 to push through extremely right-wing legislation, such as the near-total ban on abortion, has angered moderates and state business interests.

The latest poll backs up the assertion that Abbott is losing the faith of Texans. More than half (51 percent) felt that the state was heading in the wrong direction. Opinion on whether the case protecting abortion, Roe V. Wade, was split evenly down the middle. Despite the chilling to Abbott, it doesn’t look like the state is necessarily embracing Democrats. President Joe Biden has a higher disapproval rating (53 percent) than an approval one, which is probably why O’Rourke has distanced himself some from Biden.

One interesting takeaway from the poll is that it leans slightly more conservative than liberal, according to the people who responded about their political beliefs. What that indicates is that Abbott’s appeal to the conservative base of his party through anti-social justice initiatives may not be working in his favor. For instance, a solid majority (59 percent) of respondents agreed that public school teachers should be allowed to teach how racial discrimination has impacted disparity throughout history. This is in sharp contrast to Abbott and other Republicans’ crusade against what they erroneously call “critical race theory.”

The true wild card in the governor race right now, though, is with neither Abbott nor O’Rourke, but Academy Award-winning actor Matthew McConaughey. The star of Dallas Buyers Club has not officially entered the race, though he will need to decide soon if he does. However, he does fairly well in the UTT/DMN poll. More people would rather vote for him versus the governor or the former congressman, though in a three-way he is more or less tied with O’Rourke and both coming in less than Abbott.

The election is still just shy of a year away and there is much that can change. If another winter storm cripples the Texas electrical grid, expect Abbott’s popularity to fall further. Another factor is the governor’s continued mishandling of the COVID pandemic. The UTT/DMN shows mostly support for vaccine mandates, mask-wearing, and other actions, all of which Abbott opposes and in some cases is actively fighting in court. If the state continues to see a rising number of people dying from COVID while other states fall, Abbott will have a hard time making the case he has done his job.