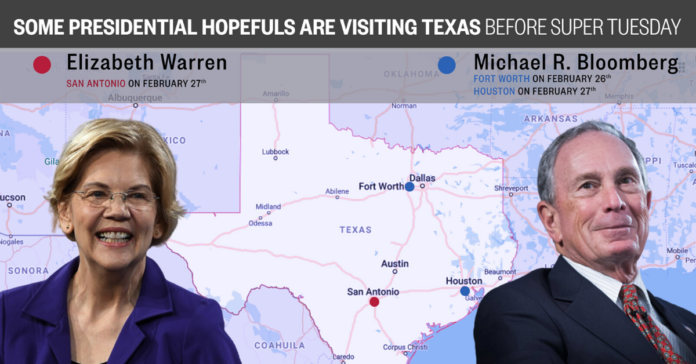 Get your boots on, Texas, it’s almost Super Tuesday! The 2020 primary elections in Texas are on March 3. The following presidential hopefuls will be on the ballots and are making appearances in our state to drum up support.

Former Vice President Joe Biden and Sen. Bernie Sanders (I-Vermont) are in a statistical tie among Democratic primary voters in Texas, followed by Sen. Elizabeth Warren (D-Massachusetts), according to a poll released Monday by the University of Houston Hobby School of Public Affairs.

Warren will be in San Antonio Thursday for a town hall with Julián Castro. You can read details and RSVP here. It’s her first visit to Texas since September, according to the Texas Tribune. Doors open at 4:30 p.m. Location: Sunset Station Lone Star Pavilion, 1174 E Commerce St., San Antonio, TX 78205.

Bloomberg returns to Texas and will hold a rally on Wednesday in Fort Worth and another on Thursday in Houston. As of this writing, details on his Houston appearance were not available.

Bloomberg has visited Texas five other times since launching his campaign in late November. In early February, the Texas Tribune reported, Bloomberg had campaigned across the Lone Star State, in San Antonio, San Marcos, Austin, Waco and Dallas, plus stops in San Elizario and Marfa and had opened nearly 20 offices in preparation for March 3.

Bernie Sanders held four campaign rallies in Texas over the weekend as early voting continues. He stopped in El Paso, San Antonio, Houston and Austin. Sanders spent his Nevada victory night in San Antonio. His campaign estimates that more than 5,700 people attended the rally at San Antonio’s Cowboys Dancehall. Sanders visited the University of Houston on Sunday afternoon, and following his Houston rally, he held a rally at Auditorium Shores in Austin.

The Houston Chronicle reported that former South Bend, Ind., Mayor Pete Buttigieg is scheduling a stop in Dallas on Sunday. Buttigieg’s last visit was in January, when he held a series of fundraising events in Houston and Dallas, according to the Texas Tribune. At the time it was reported Buttigieg had 24 paid staffers in the state of Texas.

Sen. Amy Klobuchar (D-Minnesota) has no known plan to visit Texas before March 4. The Democratic presidential hopeful campaigned in Oklahoma City over the weekend, according to KFOR4 news. The Fox News Channel has lined up a town hall with Klobuchar on Thursday night in Raleigh, N.C.

Billionaire and activist Tom Steyer has no plan to visit Texas before the primaries. But he, Bloomberg, Warren and Sanders have been buying up airtime on Texas stations, Texas Tribune reports.

The GOP has several names on the primary ballot, but the clear leader is the president. President Donald Trump was in El Paso for a pro-border wall rally in mid-February, and he was in Dallas in October for a Keep America Great campaign rally.