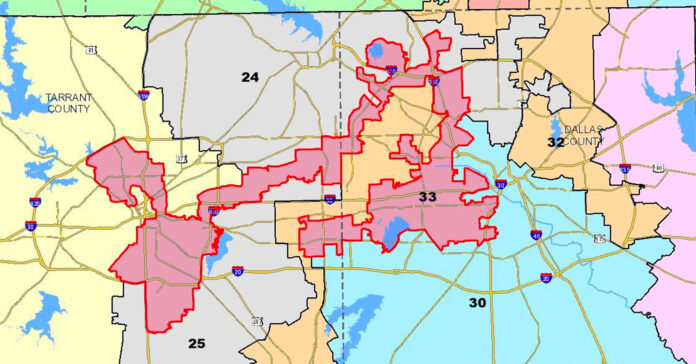 The primary elections will happen on schedule in March in Tarrant County thanks to a panel of three federal judges this week. They denied the requests of the League of United Latin American Citizens and other plaintiffs in a lawsuit asking for the election to be postponed as their case goes forward.

“After careful consideration of the parties’ arguments and four days of testimony and evidentiary submissions, and for reasons to be stated in a forthcoming opinion, the Court finds that the Brooks Plaintiffs have not satisfied the requirements necessary to obtain a preliminary injunction,” the ruling read.

LULAC is suing over the re-drawn lines of District 10 in Tarrant County. The Republican-dominated redistricting process severely weakened the voting power of Texans of color despite the fact that such residents were the main population growth that added two new congressional seats to the state. The suit also includes Democratic state Sen. Beverly Powell, who represented the district under its old lines.

District 10 has become a symbol of Republican overreach when it comes to redistricting and has drawn both legal challenges and cries of outrage from within the party. State Sen. Ken Seliger, who chaired the Senate Select Redistricting Committees in 2011 and 2013, in particular, has come down hard on what his peers have been trying to do in the Fort Worth area for a decade.

“In 2012, a three-judge federal court ruled that the Senate map adopted by the 2011 legislature was racially discriminatory because it dismantled Senate District 10 and cracked apart its minority communities,” he said in a sworn statement. “The committee member all knew that it was necessary to restore SD10 to its benchmark configurations to comply with the Voting Rights Act and the U.S. Constitution, which prevents racial discrimination.”

Seliger went on to describe conversations with 2021 committee chair Sen. Joan Huffman (R-Houston), who told him that the redrawn districts were an attempt to separate them into agriculture and oil and gas. Seliger countered on the floor of the chamber that the new lines did not support that premise and that it was clearly a second attempt by Republicans to break up minority districts for political benefit.

With both the primaries and the midterms fast approaching, the only hope for relief in District 10 now rests with the Supreme Court. However, the prospect there is much bleaker than it was a decade ago. In 2013, the court gutted essential parts of the Voting Rights Act that protected against racial discrimination. Now, plaintiffs have to prove that the discrimination was intentional, rather than just present at all. Huffman’s assertion that the new lines in SD10 are meant to craft districts based on occupational lines rather than racial ones will be a powerful excuse for the court to let them stand if they so will, even if the practical effect is obviously racially discriminatory.