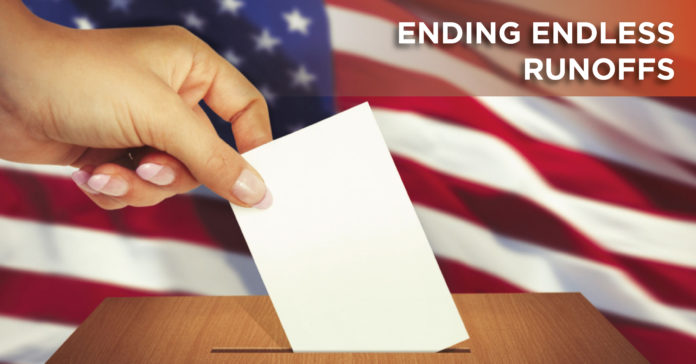 In runoff-election happy Texas, it seems voters are losing interest in a drawn-out voting process that comprises successive runoffs where turnout numbers are abysmally low.

But some say there is a fix for this so-called election system failure: Ranked-choice voting (RCV).

RCV also referred to as instant runoff voting, seeks to replace the runoff system by offering the voter the choice to rank candidates by preference.

“Ranked-choice voting really isn’t really a huge change to how we vote today but it does actually have a really big impact,” said Drew Penrose, law and policy director at FairVote. “They don’t have to come back for a runoff election weeks later if you’re in a municipality that holds runoff elections.”

Texas is plagued with low voter turnout, so bypassing several rounds of runoff “where we see the turnout in the electorate just plummet considerably…people are able to make their choices heard in larger numbers,” expressed Amanda Gnaedinger, deputy director at Common Cause Texas.

She said requiring Texans to repeatedly return to the polls to cast a vote is counterproductive and detrimental to turnout. While Gnaedinger couldn’t say ranked-choice voting will elevate turnout, she did say that it could increase the number of people voting for their candidate of choice.

“It’s less about ultimate turnout increases and more about people actually having a voice in who is ultimately representing them,” she said.

In RCV, voters rank candidates as their top choice, second choice, third choice, fourth choice, etc. If none of the candidates garner a 50 percent+1 of the total vote, the person with the least amount of first-choice votes is automatically eliminated. The tally or elimination process continues until a candidate acquires enough votes to meet the established percentage threshold.

“I think the main advantage we’re going to see is already pretty evident right now in Houston,” Gnaedinger said. “So we just had an election here in November and there’s going to be at least three more in the next four months because of all these runoffs that are happening.”

She said that many Texans feel their vote is wasted because of gerrymandering regardless of party.

Currently, RCV is not a sanctioned system in Texas, but State Rep. Art Fierro (D-El Paso) filed legislation this year calling for its implementation. Reform Austin reached out to Rep. Fierro but did not receive a response from him or his office.

Proponents say another benefit of RCV is the cost savings to the taxpayer. The bill for numerous elections in any given year can be a financial burden, especially to local governments.

The city council in Las Cruces voted to opt-in to RCV — the state legislature passed a law allowing municipalities to adopt the voting system — to reduce the costs of elections, wrote Las Cruces City Attorney Jennifer Vega-Brown in an email to Reform Austin.

Mark Numainville, the Berkeley, California city clerk, also cited costs as a motivation for his municipality’s decision to use RCV.

“The use of RCV has eliminated the possibility of expensive, low-turnout run-off elections and moved Berkeley back toward a majority threshold,” he wrote in an email to Reform Austin.

It can also transform campaign strategy from the traditional bashing of opponents to one that spells out solutions to issues in a voter-friendly manner possibly bettering the chances of candidates.

“We find, for example, that candidates tend to campaign in a more policy-focused, issue-focused way rather than mudslinging against opponents,” Penrose said. “Because if you mudsling against opponents then people who support those opponents aren’t going to rank you second and you really want to get as many as those second choices as you can.”

Of course, there are dissenting voices among those in the voting system reform world. Not everyone sees RCV as the mother of all methods.

It’s less flawed than the current one-choice system presently employed in most elections according to Aaron Hamlin, executive director of The Center for Election Science.

“RCV’s advantage over our current system is that it deals well with small-time ‘spoiler’ candidates who divide the vote with another major candidate to cause a worse outcome,” he wrote in an email to Reform Austin.

Compared to other methods, such as approval voting (selecting all, some or none of the candidates in a particular race), RCV is unnecessarily complex in both calculation and ballots, requiring expensive software and voting machines, he added.

“Also, it can still cause vote-splitting among more popular, similar candidates; can punish voters for ranking their favorite as first and it gives a poor reflection of support to third parties and independents,” Hamlin wrote.

Numainville said that in many election instances a candidate who would be victorious under plurality voting would not be successful under RCV.

“… but that is the way RCV is intended to work. A plurality winner with 30 percent of the vote is favored by that 30 percent, but 70 percent of voters favored someone other than that candidate,” he wrote.