Home Elections The Road to Political Office is Long, Expensive, and for Many Texans,...
Facebook
Twitter
Email 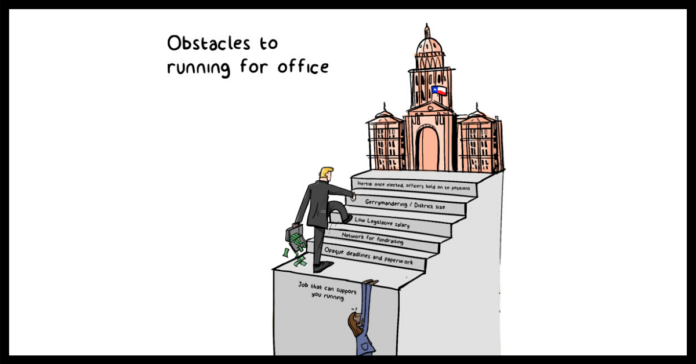 The noble citizen-legislator, speaking truth to power. The heroic filibuster in Mr. Smith Goes to Washington, or any number of stirring and righteous monologues from the television president liberals quote when all seems hopeless, Jed Bartlett.

When it comes to running for office, however, the reality is a labyrinthine set of rules for candidates and a thorny thicket of cultural, political, and—most of all—economic barriers. All of them tend to affect people from socio-economically disadvantaged backgrounds who have historically been underrepresented in leadership positions in government.

As Texas undergoes a tremendous demographic shift, the time is right to ask how to change the systems that put certain people in office and keep others out.

Among the barriers to serving in the Texas legislature, money—enough to run a campaign, access to the people who can give it, and a job that can support you once you win—comes up immediately as the primary concern of anyone considering whether or not to run.

“Our candidates are often outraised and outspent 2-1, 3-1, 5-1,” reports Royce Brooks, Executive Director of Annie’s List, an advocacy group dedicated to leveling the playing field for progressive women running for office in Texas.

Candidates must have a way to pay their bills while running a full-time campaign, which privileges those with inherited wealth, significant savings, and/or high-status jobs that afford them significant flexibility to take time off while still getting paid.

They must open accounts, pay filing fees, and hire professionals who put the pieces of a campaign together—a website, access to databases, and printed materials. Progressive candidates determined to live their values in how they pay their staff must  justify higher salary line items to donors used to campaigns surviving on the backs of young people settling for poverty wages as the price of getting involved in politics.

If they win, the reality of earning a salary of just $600 a month augmented by a per diem of $221 a day when the legislature is in session means the financial pressure never eases up.

“It’s a system,” Brooks says, “that automatically shuts out a lot of people. And of course, we know that women in general tend to make less than men, and women of color even less, so that’s who is affected.”

Isabel Longoria launched her Houston City Council run after working for ten years in politics and policy positions at the legislature and in the community. She saved diligently and timed her entry into the race carefully, knowing her nonprofit employer’s policy required her to resign once she filed the paperwork to launch her campaign.

“When I first became interested in running for office, I knew money would be an issue. I saved enough to run an election, but I’m not a rich woman. I don’t have a spouse or trust fund to fall back on. How many jobs do you know allow you to leave for six months every year [as the Texas legislature requires], that also don’t pose ethical issues once you’re elected?”

“I had the option to run for a City of Houston position that offers a salary. But how many qualified people like myself,” Longoria asks, “stay away from state positions because the money just doesn’t work?”

A slightly different money issue arises when multiple candidates run in a primary, which is good for democracy, but bad for fundraising, as Fran Watson discovered during her campaign for the Texas Senate.

“We were seeking funds and resources from some of the same donors, and they felt torn choosing between the two candidates,” Watson explained. “Many times, donors wanted to wait till after the primary to donate.”

It hurt Watson’s ability to get in front of the approximately 806,000 residents of the district she hoped to represent.

“It was too large to block walk and phone bank only. Mail was key for this district, and I simply did not have enough funds to cover it.”

As candidates work to raise adequate funds, they also face cultural and political barriers to getting elected.

Watson shared: “I was a black, lesbian woman running for office. I did not change or hide who I was. Unfortunately, some of the voters asked coded questions of my candidacy. I would be in forums where my qualifications would be scrutinized to a degree that was different than other people in the race. There were certain areas I was told I could not campaign due to my queerness. There were instances where I sent spokespeople out on my behalf because of my race.”

Structural problems are easier to overcome than societal ones, but they still create burdens, especially for first-time candidates. Following instructions can feel like a choose-your-own-adventure, with checklists and footnotes leading candidates from website to website, often confused about which step must come before the others.

The Texas Secretary of State’s website includes some information, as do the Texas Ethics Commission and often, but not always, county party websites. A candidate for the Texas Senate, for example must travel to Austin to register to run unless that candidate’s district is contained entirely within one county.

Which brings up travel and district size as a structural barrier.

Senate District 19 starts in suburban San Antonio and ends almost 400 miles away in desolate west Texas ranchland. A candidate might just barely be able to make breakfast with the Chamber of Commerce in Fort Stockton, lunch with union members in Del Rio, then get to a town hall in Pleasanton that evening, with no flat tires or traffic.

As difficult, expensive, time-consuming, and sometimes confusing as running for office is, candidates must contend also with the phenomenon of incumbent protection. Quite simply, Newton’s Law applies to officeholders. Objects at rest tend to stay at rest. Having worked very hard to win an election, they are inclined to stay.

Incumbents build campaign bank accounts that discourage challengers. When it seemed Rep. Dennis Bonnen (R-Angleton) would become Speaker of the House for the 2019 session, he began raising $153,000 per day, swelling his campaign account to over $4 million. For a potential challenger starting at zero, the odds grow longer and longer.

Long-serving incumbents can be dedicated public servants doing great work over the course of a career. When no credible challenger can afford to step up at election time, however, and incumbents do not have to work hard to win, voters can lose influence, attention, and access to their representatives that they get when the contest for their vote is more intense.

Once re-election of any given incumbent becomes a foregone conclusion, younger people living in a district must make a choice. Stay in a district where it may be one or two decades before a seat opens up, or move to a different area.

Moving isn’t an easy choice. Housing prices can affect the options of where a person can go. Moving can mean starting over as far as developing the community connections and reputation necessary for a successful campaign. Those who move into districts face charges of having parachuted in, when in reality, they might actually be escaping from a place where they never could have had a fair shot at their dream.

Pinpointing one reform that could begin to level the playing field for a much more socio-economically diverse pool of candidates is tricky, but when almost every barrier can be reduced to money, campaign finance reform could be a powerful way to start.

In Colorado, candidates for the state legislature can raise no more than $400 from any one person or entity. Oklahoma sets the limit at $2,700, and California at $4,400. Texas? There is no limit, which is a very Texas approach, but one that arguably hurts our state more than it helps when it limits who serves and who holds power.