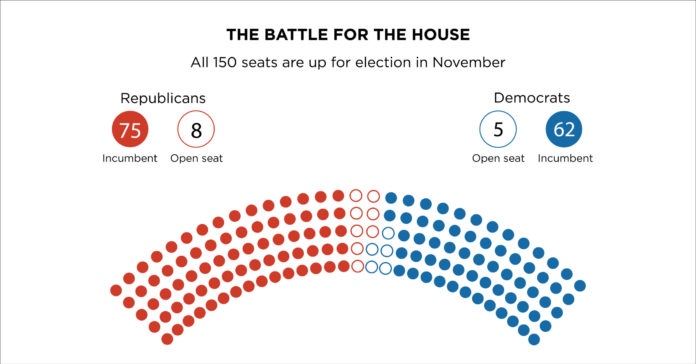 With the filing deadline for the March 3, 2020 primary over, Texans now know who will be running for the 150 Texas House seats up for grabs.

One hundred and thirty-seven incumbents opted to seek re-election, including 75 Republicans and 62 Democrats. This means there are 13 open seats, of which five were last held by Democrats and eight by Republicans.

Several incumbents have retired due to scandal, including disgraced Speaker Dennis Bonnen, Chairman Poncho Nevárez (D-Eagle Pass), who was arrested for drug possession, and most recently Rick Miller (R-Sugar Land), who made racist comments about his Asian American primary opponents.

The House District held by Nevárez runs along the southern border from Eagle Pass to Fort Hancock. The race features two Democrats and one Republican. In the Democratic primary, Herbierto Morales and Rowland Garza will face off. The winner will meet watermelon farmer Luke Brown in the general election. It is reported that Republicans Robert Garza, and Ruben Falcon have also filed, but this has not yet been confirmed by the Secretary of State.

An hour prior to the filing deadline, Mike Lang (R-Granbury) changed his mind again and decided to run for Hood County Commissioner. As a result, there will be a one week extension for candidates to file.

On Tuesday afternoon, Bill Zedler (R-Arlington) announced he will not seek a re-election bid. So far, Mansfield Mayor David Cook filed for the Republican primary and Joe Drago filed for the Democratic primary for his seat.

Among the dozen open seats, three coincide with special elections set to be decided in runoffs later next month.

Running to replace Dallas Mayor Eric Johnson in District 100 are attorney Paul Stafford and Democrat operative Lorraine Birabil, who is currently in a runoff with pastor James Armstrong.

In former State Rep. Jessica Farrar’s (D-Houston) House District 148, both runoff candidates Democrat Anna Eastman and Republican Luis La Rotta have filed for the primary. Before Eastman can meet La Rotta in November, she will face several Democrats who have signed up for the primary. They include rematches with Penny Shaw and paralegal Adrian Garcia, both of whom placed sixth and third respectively in the November special election. Emily Wolf and former candidate for Houston City Council District 4 Cynthia Reyee-Revilla are also running.

As for replacing Chairman John Zerwas (R-Richmond) in the Fort Bend County House district, both candidates in the January 28 runoff, educator Elizabeth Markowitz and perennial candidate Gary Gates, have filed as has Schell Hammel, a Vape business owner who was previously running in the crowded Republican primary for Texas’ Congressional District 22. Markowitz will meet one of the two Republicans in the Nov. 3, 2020 general election.

In total, there are 109 contested races for the State House.