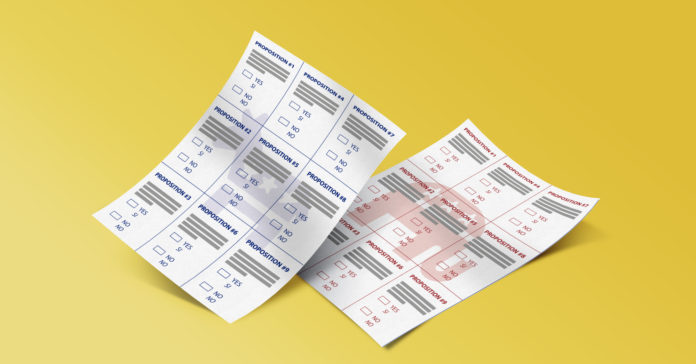 Texas has open primaries. This means any eligible registered voter can vote in either one of the two primaries, Democrat or Republican. If you vote in a primary, you are only eligible to vote in that same party’s primary runoff. If you did not vote in the primary, you can vote in any party’s primary runoff. In addition to candidates on the ballot, Texans will find nearly a dozen propositions come March 3 (or sooner if they vote early).

Each party’s state executive committee decides in the prior year what propositions they want on their primary’s ballot. Voters will agree or disagree with the props by selecting yes or no.

“Party ballot propositions are used to get a sense of the opinions of the most active party members at the ballot box,” University of Houston Political Science Professor Brandon Rottinghaus told Reform Austin.

Parties care about the opinions of these voters because they determine who wins primaries. Rottinghaus continued, “ballot questions are a simple way to learn what partisans in both parties think. Parties will also “push poll” their voters, asking them questions designed to get a partisan response which can be used to make political or policy decisions.”

Conventions for both parties in which they finalize their party platform happen over the summer, so this will serve as the first indicator of the cycle on where the electorate stands.

The Republican Party has the following propositions on their primary ballot:

Texas should not restrict or prohibit prayer in public schools.

Texas should reject restrictions on the right to keep and bear arms.

Texas should ban the practice of taxpayer-funded lobbying, which allows your tax dollars to be spent on lobbyists who work against the taxpayer.

Texas should support the construction of a physical barrier and use existing defense-grade surveillance equipment along the entire southern border of Texas.

Texas parents or legal guardians of public school children under the age of 18 should be the sole decision makers for all their children’s health care decisions including, but not limited to, psychological assessment and treatment, contraception, and sex education.

Texas should ban chemical castration, puberty blockers, cross-sex hormones, and genital mutilation surgery on all minor children for transition purposes, given that Texas children as young as three (3) are being transitioned from their biological sex to the opposite sex.

Texans should protect and preserve all historical monuments, artifacts, and buildings, such as the Alamo Cenotaph and our beloved Alamo, and should oppose any reimagining of the Alamo site.

Texas election officials should heed the directives of the Office of the Governor to purge illegal voters from the voter rolls and verify that each new registered voter is a U.S. Citizen.

Bail in Texas should be based only on a person’s danger to society and risk of flight, not that person’s ability to pay.

Texas should limit our state legislators’ terms to 12 years.

This year, the Demcoratic primary propositions, which the state party calls the 2020 Texas Democrats Bill of Rights, are as follows:

Should everyone in Texas have a right to quality healthcare, protected by a universally accessible Medicare-style system that saves rural hospitals, reduces the cost of prescription drugs, and guarantees access to reproductive health care?

Should everyone in Texas have the right to high-quality public education from pre-k to 12th grade, and affordable college and career training without the burden of crushing student loan debt?

Should everyone in Texas have the right to clean air, safe water, affordable and sustainable alternative energy sources, and a ​responsible climate policy that recognizes and addresses the climate crisis as a real and serious threat that impacts every aspect of life on this planet?

Should everyone in Texas have the right to economic security, where all workers have earned paid family and sick leave, training to prepare for future economies, and a living wage that respects their hard work?

Should everyone in Texas have the right to a life of dignity and respect, free from discrimination and harassment anywhere, including businesses and public facilities, no matter how they identify, the color of their skin, whom they love, socioeconomic status, disability status, housing status, or from where they come?

Proposition 6: Right to Be Free from Violence

Should everyone in Texas have the right to live a life free from violence—gun violence, racial hatred, terrorism, domestic violence, bullying, harassment or sexual assault—so Texans can grow in a safe environment?

Should everyone in Texas have the right to affordable and accessible housing and modern utilities (electricity, water, gas, and high-speed internet) free from any form of discrimination?

Should every eligible Texan have the right to vote, made easier by automatic voter registration, the option to vote by mail, guaranteed early and mobile voting stations, and a state election holiday — free from corporate campaign influence, foreign and domestic interference, ​and ​gerrymandering?

Should everyone in Texas have the right to a fair criminal justice system that treats people equally, uses proven methods for de-escalating situations instead of excessive force, and puts an end to the mass and disproportionate incarceration of people of color for minor offenses?

Should there be a just and fair comprehensive immigration reform solution that includes an earned path to citizenship for law-abiding immigrants and their children, keeps families together, protects DREAMers, and provides workforce solutions for businesses?

Should Texas establish equitable taxation for people at all income levels and for businesses and corporations, large and small, so our state government can fund our educational, social, infrastructure, business, and all government services to improve programs necessary for all Texans to thrive?

Texas Democrats said the outcome of the votes on these propositions will “guide our party, our campaigns, and our movement in the 2020 election.”

Early voting for the Texas primaries starts today and runs through Feb. 28.