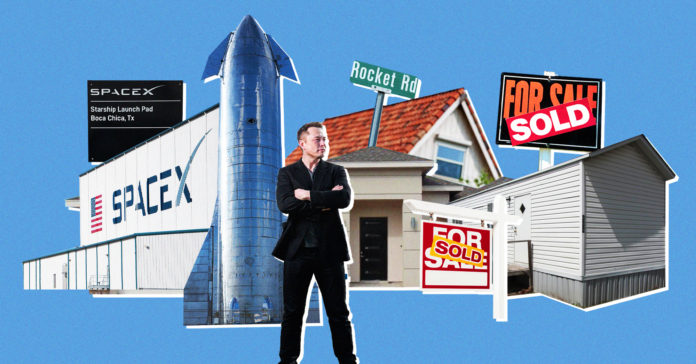 SpaceX is offering to buy all the homes in Boca Chica Village, a tiny Texas town.

Elon Musk’s vision of a privately owned launchpad for vessels headed to the International Space Station and other off-planet destinations is an addictive one, particularly at a time when America no longer has its own shuttle capabilities. People watched avidly as the company began testing the new Raptor rocket in 2019. Boca Chica, a site for SpaceX’s spaceport and testing, has been called “the last town before Mars.”

Those triumphs have raised concerns about the safety of the people of the small town. Located near a fantastic beach for surfing, the village doesn’t even have municipal water pipes. Boca Chica residents get their potable water delivered, and there are no shops or restaurants. Nonetheless, it’s home to 26 Texans, according to the last census, mostly retirees who live part-time in the village after escaping harsh summers elsewhere. And SpaceX is offering to buy them out of their homes.

During the Raptor tests, residents were told to go outside of their houses lest the launch blown their window glass in. Nothing of the sort happened, but between that announcement and the occasional explosions that happen at the SpaceX facility, it appears the company is prudently looking to own the land around them before a mishap causes injury or worse.

This recently led to some squabbles about their offers. On Sept. 12, SpaceX told Boca Chica residents that it would buy homes at three times the value determined by their appraisal commission. By most accounts the offer is fair.

Some residents feel that the offers are flawed, however. Celia Johnson told the Dallas Morning News that the offer was based off land that SpaceX has previously purchased in the area rather than what bank appraisals had been done on their homes.

Money concerns aside, some residents are worried that becoming the newest outpost to the stars will destroy the unique character of their town.

There is also the environment to account for. Located in a wildlife refuge, Boca Chica sees hundreds of migratory birds pass through as well as sea turtles. The same power that can blow out windows would probably not be kind to local flora and fauna. Some of them are vulnerable or endangered.

That said, SpaceX is bringing money to the area. Hundreds of jobs are promised, a prospect that has excited the nearby city of Brownsville. Most people seem keen to see the region reborn as a 21st Century technological center. Even some of the Boca Chica people are in on it, snapping photos and hosting live cams of the goings on at the SpaceX facility.

Still, Boca Chica cannot reasonably be both an idyllic surfer and retiree hideaway and a futuristic starport, which is why the residents who SpaceX are trying to buy out are holding out for a more generous offer. It’s not just the beginning of a new age; it’s the death of an old way of living, according to some.

“There’s really no place like it,” said Cheryl Stevens to The Dallas Morning News. “It’s really going to be impossible to replace. Not just a reasonable offer but actually on the generous side. This isn’t about making a buck. This is acknowledging what we’re giving up.”