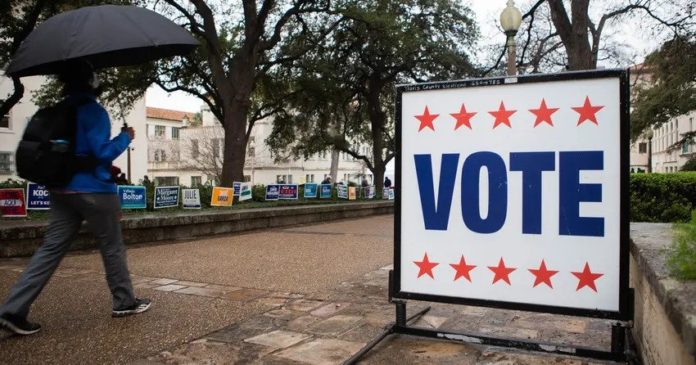 A coalition of voters and civil rights groups opened a new front Monday in the legal wars over mail-in voting in Texas during the new coronavirus pandemic.

Several lawsuits already underway challenge state limits on who can vote by mail, but a lawsuit filed Monday dives into the mechanics of mail-in balloting, arguing that existing rules will deprive voters of their constitutional rights in the middle of a public health crisis. In the federal lawsuit filed in San Antonio, five Texas voters with medical conditions, Voto Latino, the NAACP-Texas and the Texas Alliance for Retired Americans argue that four existing rules for absentee voting will place undue burdens on the right to vote, or risk disenfranchising Texans, during the pandemic.

Naming Texas Secretary of State Ruth Hughs as the defendant,they’re asking a federal judge to block the state from enforcing the provisions.

“Even if all registered voters are eligible to vote by mail in Texas in the November election, that would not be sufficient to prevent the serious risk of disenfranchisement and threats to public health that will occur if the Vote By Mail Restrictions remain in place in the pandemic,” the plaintiffs, who are backed by the National Redistricting Foundation, wrote in their complaint.

With the July primary runoffs and November elections approaching, the state is facing multiple challenges to its voting-by-mail rules at a time when voters might be unwilling to risk a trip to the polls because of the pandemic.

The lawsuit filed Monday is the latest in a flurry of litigation against the state’s rules for absentee voting that appears to be headed for a drawn-out appeals process. The court battles so far have zeroed in on who is eligible to ask for an absentee ballot which they can fill out at home and mail in. Democrats and nonpartisan civil rights groups are pushing to expand eligibility during the pandemic to include voters who lack immunity to the new coronavirus and don’t want to risk going to a physical polling location. Texas’ Republican leadership is fighting the expansion, citing a need to “consistently” follow the state’s rules for mail-in ballots that are “specifically reserved for those who are legitimately ill.”

The newest legal front centers on the actual process of voting by mail as local election officials prepare for an influx of applications for mail-in ballots, and reassess their processes for storing and counting those votes.

Texas was already facing legal challenges to its mail-in ballot procedures. Last year, two voters sued the state after their votes were rejected when local officials determined the signatures on their ballots were not theirs. Like in the current lawsuit, they raised constitutionality questions over the rejection of mail-in ballots based on signature doubts and the lack of notification to voters so they can “cure” their ballots.

But the latest challenge brings in voters who already qualify to vote by mail based on their disabilities but who must navigate the provisions for absentee voting in question during the pandemic. Among the plaintiffs is George “Eddie” Morgan, a 63-year-old former nurse in Dallas who has a genetic lung disorder and has been in strict isolation during the coronavirus outbreak in his community.

Morgan receives $19 dollars a week in food stamps and relies on food banks. To obtain postage for a mail-in ballot online to remain in isolation, he would have to purchase an entire book of stamps for $11, according to the lawsuit.

“The Postage Tax’s burden on the right to vote is severe. At best, it requires Texans — millions of whom are vulnerable to severe complications from COVID-19 or have vulnerable loved ones — to pay to vote by mail so that they can avoid exposing themselves to the virus while exercising their right to vote,” the plaintiffs wrote. “At worst, it disenfranchises the millions of Texans who cannot risk exposure to COVID-19 but who also cannot obtain postage to mail their ballots.”