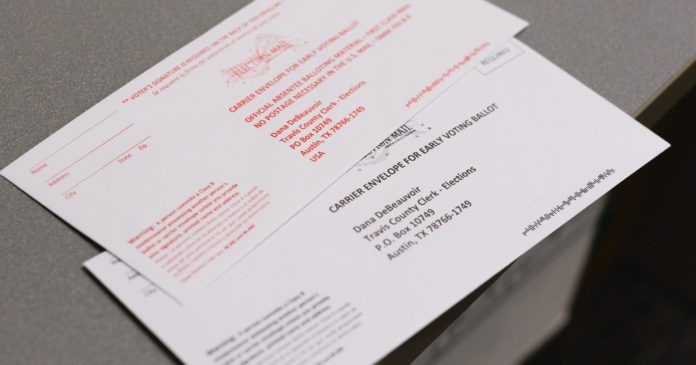 Citing the threats of the coronavirus, six Texas voters filed suit in federal court Wednesday challenging restrictions that limit age eligibility for voting by mail to those 65 and older.

In a lawsuit filed in San Antonio, the voters — all between the ages of 18 and 28 — claim the Texas election code violates the 26th Amendment’s protections against voting restrictions that discriminate based on age. While all Texas voters 65 and older can request a mail-in ballot, those younger than 65 must meet a narrow set of requirements to qualify.

The voters are backed by the National Redistricting Foundation, an affiliate of the National Democratic Redistricting Committee chaired by former U.S. Attorney General Eric Holder. The lawsuit cites the urgency brought on by the coronavirus outbreak in asking a federal judge to remedy what they argue are discriminatory and unconstitutional age restrictions.

“Having opted to make mail-in voting an option for voters in Texas, Defendants may not constitutionally choose to restrict access to the franchise to voters for no other reason than the fact that they are 18 years old, 25 years old, or 64-and-a-half years old. Period,” the lawsuit argues. “While the Absentee Ballot Age Restriction would be unconstitutional under any event, in the current circumstances its application is unconscionable.”

The age discrimination lawsuit is the latest front in an ongoing court battle to open up voting by mail in Texas during the coronavirus pandemic that has shut down most of the state and ahead of the July 14 primary runoff elections. Until now, mail-in voting has been fairly limited in Texas, allowing voters to qualify for a ballot they can fill out at home and mail only if they are 65 years or older, have a disability or illness, will be out of the county during the election period, or are confined in jail.

Democrats and civic organizations are waging a similar fight in state district court in hopes of getting the courts to rule that the risk of contracting the coronavirus at a polling place qualifies voters to receive mail-in ballots under the state election code. They’ve won the first round for the runoff election, but the lawsuit is headed for a drawn-out appeals process. Texas Attorney General Ken Paxton intervened in that lawsuit to oppose what could amount to a massive expansion in mail-in voting, arguing that the vote-by-mail disability qualifications apply to voters who already have a “sickness or physical condition” and not those who fear contracting a disease “whether it be COVID-19 or the seasonal flu.

As part of that fight, the Texas Democratic Party also filed a federal lawsuit arguing that holding a traditional election under the conditions brought on by the coronavirus — with current rules for mail-in voting in place — would violate several constitutional protections for voters, including the 26th Amendment.

But the newest lawsuit zeroes in wholly on a violation of the 26th Amendment in asking a federal judge to declare age restrictions for voting by mail unconstitutional to allow voters under the age of 65 to use that voting option.

“To be sure, some number of Texans will need to vote in person in these coming elections, even if mail voting is widely available,” the lawsuit reads. “But foreclosing this option to millions of members of the electorate simply on account of their age is facially unconstitutional.”