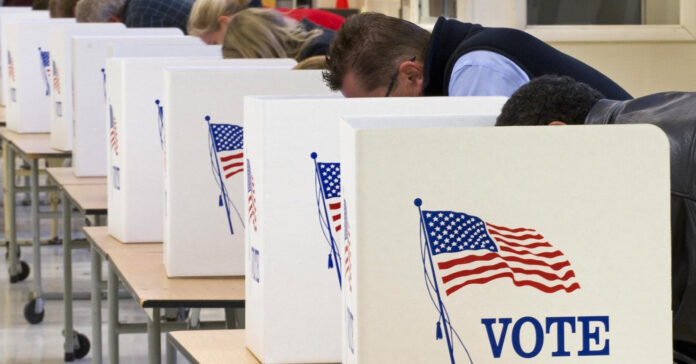 On Monday it was the first day of Early Voting, and compared to the 2018 midterm elections – where Texans saw an uptick of 18 percentage points in voting turnout – the numbers were disappointing.

So why is it that in 2022, only 2.84% of registered voters in Texas’ 16 largest counties, according to data from the Texas Secretary of State website, actually cast a vote? 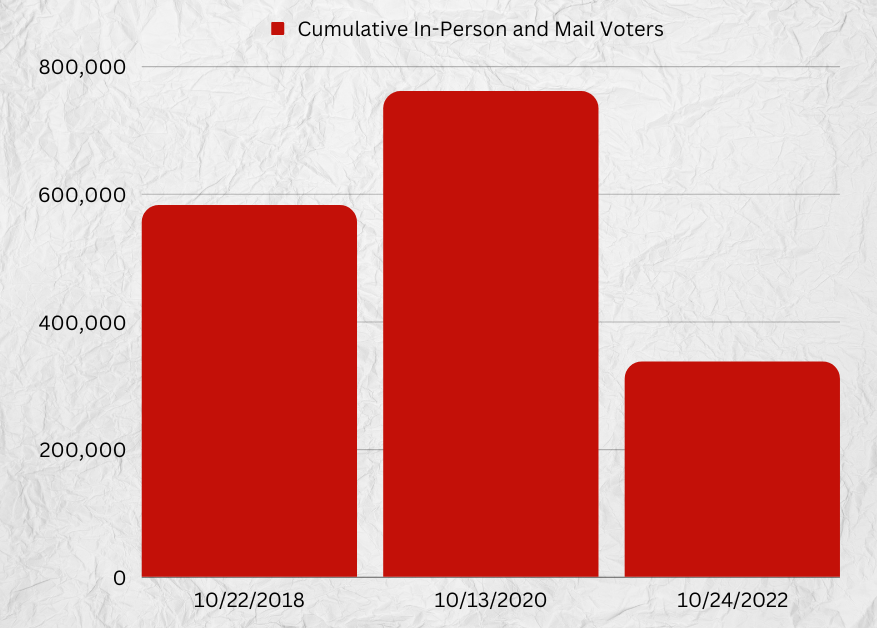 Comparison of Texas’ 16 largest counties cumulative In-Person and Mail Voter numbers by the end of the first day of Early Voting.

Low voter turnout has always haunted Texas, even in the 2018 midterm election where the state saw a double-digit percentage point increase, it still lagged behind the national average and trailed all but 10 states, according to the United States Elections Project.

Before 2018, Texans seemed to be unmotivated to vote, in part because of the uncompetitive races at the top of the ballot. For example, in 2014, when Republicans John Cornyn and Greg Abbott won their respective races for U.S. Senate and governor by over 20 points, just 28.3 percent of eligible voters cast a ballot – among the worst in the nation, as reported by The Texas Tribune.

In 2018, however, there was an obvious shift in voter interest, for the first time Democrats fielded candidates in every Texas congressional district and they were boosted by U.S. Rep. Beto O’Rourke’s efforts to unseat Republican U.S. Sen. Ted Cruz.

O’Rourke fell short by less than 3 percentage points. But, Democrats did flip Republican-held seats in the U.S. House, and the Texas Legislature, as well as lower on the ballot.

The blue fever continued in the 2020 cycle. While voter turnout did see a substantial uptick, in the end, neither party flipped a seat; great news for Republicans, disappointing news to Democrats.

And now, in 2022, voters don’t seem to be showing up, even as Democrats pour all their effort and money to get people to the booths.

Apart from Republican dominance garnering a general sense of apathy among Texans, other factors have contributed to Texas’ low voter turnout, including demographics.

A large percentage of Texans are young people and Latinos, two groups of people who are less likely to vote than the general population – a third of the state’s Hispanic population isn’t of voting age.

According to The Texas Tribune, Immigrants also make up a large share of the Hispanic population, and they either cannot participate in elections or, if naturalized, tend to be less politically engaged.

Apart from demographics, voting laws in Texas are the most restrictive in the country.

States with the highest turnout rates have same-day registration, automatic voter registration, or some other form of permissive voting law, meanwhile, Texas voters have one of the earliest registration deadlines in the country, and in most cases, you cannot register online.

And then, in 2020, a federal appeals court ended the popular straight-ticket voting, an option that was popular among voters in both parties; in 2018, two-thirds of Texas voters used that option.

And then, last August, Texas Republicans passed a new voting law, SB 1, that has made the 2022 election cycle the most restrictive yet. The new law imposes new identification requirements in the mail-in voting process, prohibits election officials from soliciting mail-in ballots, provides partisan poll watchers with more autonomy at the polls, and outlaws 24-hour and curbside voting.

While it is still early to predict the outcome of this election cycle, early voting numbers are suggesting the lowest voter turnout yet, since 2014, when Texas ranked near the bottom in voter turnout in the country