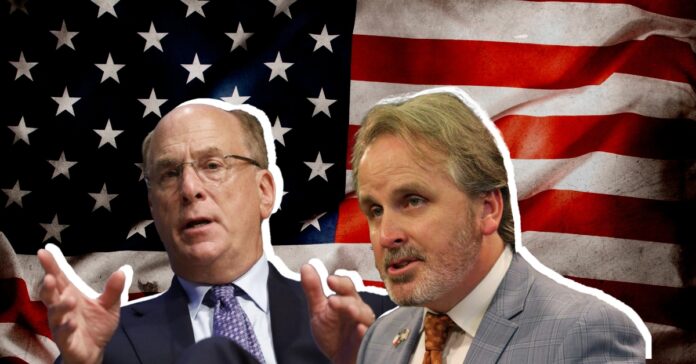 Dec 15 (Reuters) – Financial executives and Texas state senators clashed over company concerns for climate change at a hearing on Thursday, a rare in-person confrontation asRepublicans ramp up attacks on the use of environmental, social and governance (ESG) factors in investing.

Texas Republicans at the hearing, which was webcast, questioned whether the participation of BlackRock Inc BLK.N and State Street Corp STT.N in industry efforts to cut emissions put too much pressure on portfolio companies.

Bryan Hughes, chair of the Texas Senate committee that held the hearing, expressed skepticism the managers could set aside the cooperative goals of groups like the Net Zero Asset Managers initiative, which Vanguard Group Inc quit last week. When BlackRock pledged all its assets to such efforts, Hughes asked at one point, “you didn’t mean that? You had your fingers crossed?”

BlackRock Senior Managing Director Dalia Blass said the firm has maintained its independence with the groups. “We have one bias, and that’s to get the best risk-adjusted returns for our clients,” Blass said.

Even as they take heat from energy-producing U.S. states, asset managers have faced pressure from climate activists and Democrats to take more environmental action.

With some $8 trillion under management, BlackRock has been singled out by Texas for alleged over-pressuring of its important energy sector. The company has been penalized under the terms of a new state law to protect fossil fuel companies.

A number of State Street funds were also designated. Lori Heinel, global chief investment officer for State Street’s asset management arm, said in prepared remarks, “We are obligated to act as a fiduciary for our clients, and that duty is the basis for our approach to ESG.”

Earlier at the hearing, Texas energy businessman Bud Brigham said a Credit Suisse Group AG GSGN.S banker suggested he tweet in support of net zero goals to help get a loan. Brigham said he regarded the request as coercion. “I was very offended by that,” he said.