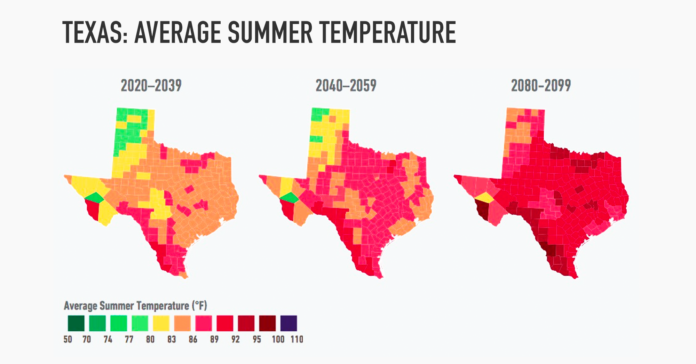 Everything isn’t just bigger in Texas — it is about to get a lot warmer, too. Droughts and urban flooding also are predicted to get worse.

Based on the American climate prospectus, the average summer temperatures across the state will rise over the next 70 years.

From 2020 through 2039, the average summer temperature is predicted to be in the upper 70s to low 80s in the northernmost part of the state and to 90 to 100 degrees in south Texas.

The predictions take a dramatic turn for the years that follow.

Between 2040 and 2059, the panhandle and East Texas are expected to become noticeably hotter. By the year 2080 through 2099, the heat index soars, and the whole state will experience upper 80s to 100-degree temperatures.

A study of historic trends and future predictions of extreme weather from the Office of the Texas State Climatologist at Texas A&M University shows that if the summertime temperatures rise as expected, the state’s number of 100-degree days would almost double “to about 21 per year by 2036.”

“The number of 100-degree days in an ordinary summer will continue rising along with average temperatures.  Where most people live, it will be even worse, as urban heat islands add to the heat,” wrote John Nielsen-Gammon, the Texas state climatologist at Texas A&M University, in an email to RA News on Friday.

The data shows that Texas experienced a 7 percent median increase in the 100-year rainfall amount between the years 1960 and 2017, and it is anticipated that by 2036, there will be an increase of an additional increase of 2-3 percent when it comes to extreme rainfall intensity.

Warmer temperatures can affect rainfall and change storm structure, according to the study. This extra precipitation intensity can affect the frequency of dangerous storms, the data states.

Drought increases are predicted for West Texas and the Panhandle that when coupled with increased temperatures will put stress on plants. Despite the increase in rainfall predictions, rising temperatures are expected to affect the soil and evaporative losses, the study found.

“The drying of rural soils can lead to an excessive increase in daytime temperatures,” the study reads.

Drier land can also create a risk for more wildfires like California is having to deal with due to its drought conditions.

“Droughts are a problem that can be dealt with at the municipal level through a variety of tools, as long as we have a good idea about what’s coming,” Nielsen-Gammon explained.  “Some of those tools cost money, but other tools, like landscaping with less thirsty plants, can save money.”

Climate change also affects flooding. Texas’s urban areas have been growing, increasing population by over 2 percent per year from 2000 through 2010, according to the study. This urban growth can affect precipitation runoff and urban flooding. “Urban flooding impacts are determined by rainfall, by development, and by flood control infrastructure. With rainfall becoming more intense, greater precautions are needed with development and flood control,” Nielsen-Gammon wrote.

With population growth in mind, locals and transplants may be surprised by the risks that come with climate change.

“The challenge for many newcomers is recognizing the risks of extreme weather in Texas,”  Nielsen-Gammon wrote. “The whole world knows about Texas hurricanes and tornadoes, but flooding and wildfire involve risks that can be partly addressed at the homeowner level if people are aware of them. Imagine learning that the house you just bought is sitting inside a reservoir!”