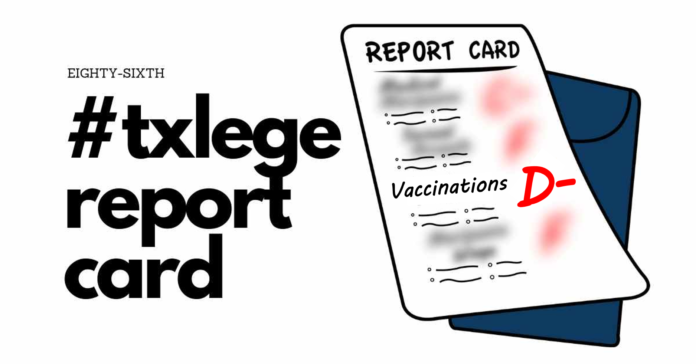 Vaccinations take a hit in filing but nothing gets much further than that with trouble brewing.

During the 86th session the growing rate of anti vaccination ideology in people’s homes, schools, and social groups pressed into the legislative sphere again.  Supporters of the anti-vaccination movement filed bills protecting these views including preventing medical personal from discriminating based on immunization records, informed consent, and creating easier avenues for accessing exemption documentation.

However, the only bill to gain enough traction to pass was HB1418 which requires distribution of written notice of immunization information and vaccination history of emergency personnel at certification or recertification with the purpose of preventing issues in an emergency. Recently, a rider to the Texas budget was added which directs the Department of State Health Services to provide vaccinations to Medicare-D patients. Participants in the program are uninsured Texans who can now receive vaccinations they were not previously able to afford.

The Texas Department of State Health Services lists 2018-2019 immunization requirements for children attending public schools as well as the 2019-2020 requirements. However, there is the exemption section which allows for individuals to avoid vaccinations for a variety of reasons ranging from medical to conscience including religious exemptions. Those exemptions are the cause of many continual fears based on outbreaks of previously eradicated diseases.

Dr. Peter Hotez, Dean of Baylor’s National School of Tropical Medicine in Houston,expressed his concern regarding the rising exemptions and the health and safety of Texas children in a tweet this session.

These concerns didn’t go unanswered. Firing back, Representative Jonathan Stickland (R-Dallas/Fort Worth), responded in a tweet May 7th  “Make the case for your sorcery to consumers on your own dime. Like every other business. Quit using the heavy hand of government to make your business profitable through mandates and immunity. It’s disgusting.”

Although some Texans and legislators, like Stickland, agree that vaccinations are fictional, the Texas medical/scientific community came out countless times this session stating their concerns with the current situation. Allison Winnike, president and CEO of the Houston-based Immunization Partnership said in a statement reported by the Houston Chronicle “It’s time for Texans to take action.” Additionally, the World Health Organization has listed vaccine hesitancy as one of the top ten threats to global health in 2019.

As non-medical exemptions increase again in Texas many will ask what’s the big deal? What is there to be afraid of? In Texas – measles. Measles, an infectious virus, has been resurfacing in the state for some time. Eradicated in the United States in 2000 ,according to the Center for Disease Control, measles has begun popping up in 26 states at alarming rates, Texas included.

As the percentage of exemptions increase, the reported measles cases correlate. In Texas alone this year there were 64,176 exemptions filed. This may be a small number compared to the total population, but it accounts for a 2,000 percent increase since 2003 with 3,000 documented exemptions that year. The current number of measles cases in Texas as of April is 15 with the trend rising. Since vaccinations were left hanging this session, Texans are left in no man’s land.

For vaccination legislation this session Reform Austin has given the legislators an “Incomplete.”