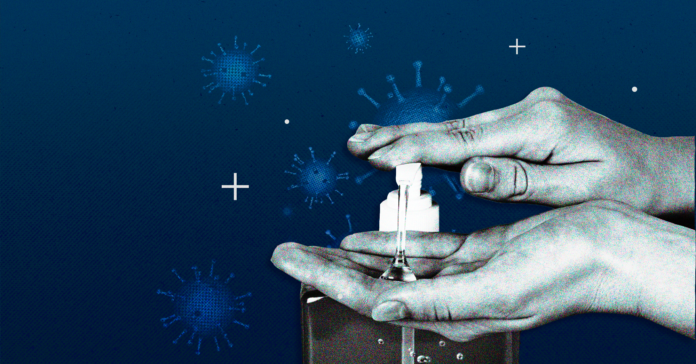 Distilleries across Texas have shifted their manufacturing focus to producing much-needed hand sanitizer for hospitals and first responders during the COVID-19 crisis.

Forty-six distilleries in Texas are currently making hand sanitizer, according to the Texas Distilled Spirits Association.

“Hand sanitizer is a simple and effective way to kill germs, which is important to reduce the spread of disease within any kind of health care setting,” said Seth Christensen, chief of media and communications for the Texas Division of Emergency Management. “With sanitizer in short supply, additional sources are important.”

Stephanie Houston, cofounder of HYE Rum in Hye, Texas, told Reform Austin via email that they had high-proof waste available and contacted a distillery in Portland, Oregon for a recipe.

“We just really felt it was the best thing to do,” she said. “We had been following along at what was happening in the Northwest, though I never thought it would turn into this. I always wanted our rum to have a big impact, but I thought it would be in a Piña Colada.”

Texas distilleries began making hand sanitizer after Gov. Greg Abbott issued a disaster declaration for all counties in Texas on March 13, Amber Hausenfluck, a spokesperson for the Texas Distilled Spirits Association, wrote in an email to Reform Austin.

“Donations began that weekend and haven’t stopped since,” she wrote.

Many wineries have also gotten on board, said Steve Newsom, co-owner of English Newsom Cellars in Lubbock. His winery saw the need and didn’t hesitate. They had 1,000 gallons of wine converted into pure alcohol and donated it to HYE Rum.

“It was about $25,000 worth of wine for us. I don’t know how much more we can do, but it’s definitely made us analyze our future business model because we’ve been really focused on premium wines,” he said.

Houston said they were truly moved by the response from their local Hill Country community.

“The farmers, the first responders and just our neighbors were all so grateful for something small we could do. We felt grateful to be of service to our community. Then the storm hit. Calls started coming in from all over the country.”

She said the sanitizer is developed by using high-proof ethanol — a small byproduct of distillation — and then proofing it down to 80 percent alcohol by volume, adding three percent hydrogen peroxide and glycerol. Then it has to rest before it can be sent out for use.

But the out-the-door process hasn’t been as smooth as the rums these producers distill. Jurisdictional bureaucracy between government agencies has set up a few hurdles.

“In order to produce hand sanitizer, you have to have what’s called an industrial alcohol permit … and you had to be regulated by the FDA,” said Spencer Whelan, executive director of the Texas Whiskey Association in an interview. “Now that has been waived, and there’s two organizations that are at the crux of this.”

The two agencies Whelan referred to are the Alcohol and Tobacco Tax and Trade Bureau, which collects taxes and enforces regulations on alcohol and other items, and the U.S. Food and Drug Administration. He said the TTB waived the industrial license requirement for distilled spirits plants, essentially giving the distilleries the greenlight to produce ethanol or sanitizer.

“But then the FDA stepped in and has had a series of different guidance documents about how you’re allowed to formulate it and what you must go through to make sure that the FDA approves of what you’re doing,” Whelan said.

However, he admitted their guidance has progressively become more lenient during the last three weeks, albeit changing two to three times during that span.

The production process has changed multiple times in the past 12 days, Houston said.

“We’ve done our best to keep up with the changing FDA requirements,” she said. “Let me tell you, registering on the FDA site was really confusing, but we got it done.”

There is a process called denaturing which is turning consumable ethanol into inconsumable alcohol for drug use, Whelan explained. A federal code lists the three formulas allowed for denaturing, he said. But the downside is that code in this pandemic can cause a scarcity of the three ingredients needed to mix with the ethanol.

“So we’ve been fighting through all of these different organizations that typically don’t talk to each other and trying to get them to give guidance that’s the most effective,” he said.

Whelan said a request has been made to the FDA to allow undenatured alcohol to be present in hand sanitizer to mitigate the shortage and to prevent distilleries from losing their licenses in the long term, saying that the product would still be effective.

Despite those challenges, HYE Rum is undeterred.

“For us, this is an opportunity to stay busy, serve our state and keep our employees working and paid. I’ll let you know how that changes in 12 more days!” Houston said.

Distilleries are forging ahead while negotiating government regulations.

“There’s something truly special and heroic going on with this industry,” Whelan said.