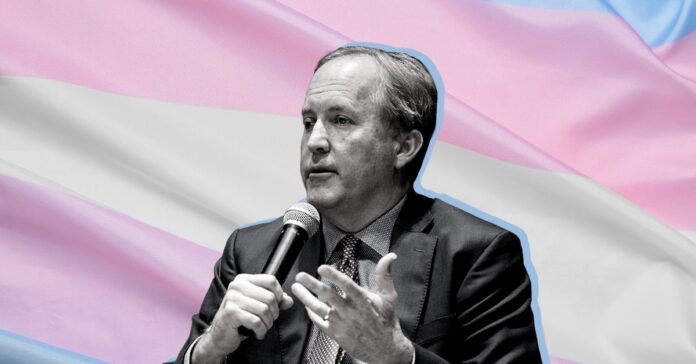 Texas Attorney General Ken Paxton ordered drivers license offices to provide him with a list of all transgender Texans this summer according to a bombshell report by The Washington Post.

In June, the chief of the Texas Department of Public Safety’s license division asked employees to provide a count of everyone who had changed gender markers on their IDs over the last 24 months. The request turned up over 16,000 Texans. A spokesperson for the office confirmed that the AG office had requested the information, but was not at liberty to say exactly who requested it.

None of the emails obtained by the Post explain why Paxton might have wanted the information, but it’s easy to guess that it is to further escalate the war on trans people that Texas Republicans have been waging for the last two years.

The request came shortly after the Texas Supreme Court struck down Paxton and Governor Greg Abbott’s attempt to use DPS to target the parents of trans youth. The two state leaders claimed that parents who provided gender-affirming care to trans children were participating in child abuse. Every major medical association in the country agrees that gender-affirming care improves the quality of life for trans children, but Paxton authored a legal opinion that it constitutes child abuse anyway. The matter is still making its way up the courts thanks to a lawsuit by PFLAG.

This is in addition to laws passed in the latest legislative session that restricted what sports trans youths could play in the state. The ban on “critical race theory” also targets lessons on gender identity, and books normalizing marginalized genders have been targeted for removal from school libraries. Some Texas Republicans have also proposed banning drag performers from being near children, which could very likely have the effect of criminalizing trans people being around children at all.

The rhetoric from conservative leadership has not gone unnoticed among the general population. Increasingly, armed protestors have begun threatening drag shows. Some of these have turned violent. Accusations of sexual grooming of children have become common when the very existence of trans people is acknowledged.The attempt of the state’s top law enforcement officer to create a list of marginalized people after a public campaign of harassment and oppression, has many hallmarks of outright fascism. Attacks on trans people are often used to soften the beachhead for further restrictions of personal rights and freedoms as they trade on the general public’s ignorance and suspicion of gender diversity. The fact that Paxton’s office will not even admit that they sought the information despite a compelling paper trail, further indicates that their intended use of the list is not benevolent.