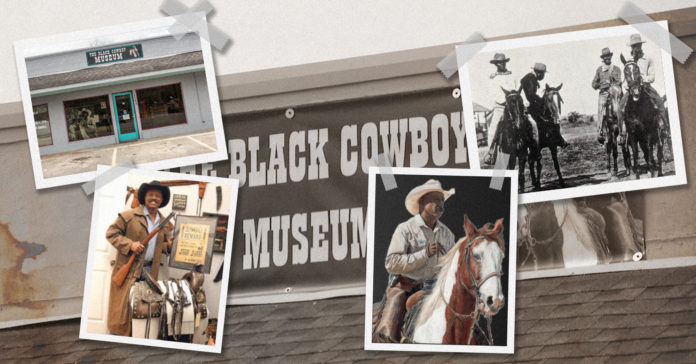 If you ask Larry Callies what the most popular exhibit at the Black Cowboy Museum is, he’ll tell you it’s him. It very well could be. In a phone call, Callies told Reform Austin he had just received a proclamation from the city of Richmond, Texas and then shared he was notified this month about another proclamation from Rosenberg, TX. The museum is doing very well, he said. The world has been calling, and he said reporters from Germany, Africa and India have called. This month, Netflix also visited the museum.

It’s Black History Month and already thirteen buses have visited the museum that gives a voice to unsung Black cowboys with displays of artifacts, photographs and heirlooms representing the legacy of Texas’ Black cowboys. Callies said the museum receives over 100 bus loads of visitors a year, and it has grown fifty percent since the museum first opened in 2017.

In a New York Times story in September 2019, Callie referenced his cousin and how the history of the Black cowboy spreads through his own family. Sharing in the story that he believes his cousin, Tex Williams, was the first African American boy to win the Texas High School Rodeo Championship in 1967, keeping in mind that rodeos had previously been segregated.

According to the Texas State Historical Association, the first census in Austin’s colony in 1825 showed 443 enslaved people in a total population of 1,800. During a time when millions of cattle grazed and ran wild, enslaved people became cowhands and were the heartbeat of ranches and the ranching business. They were especially important during the Civil War when white Texan ranchers went to fight, leaving their ranches and cattle behind.

It was their slaves who kept the ranch going, and they learned how to maintain the cattle herds and the land. They were becoming cowboys.

Next came the Emancipation Proclamation that freed the ranch workers. However, ranchers didn’t want to lose their skilled and valued workers, and in an ironic twist, enslaved people were now hired for the work they had done previously without pay.

Here are five Black cowboys all Texans should know about.

Bill Pickett, born in 1870 in Texas to former enslaved parents, became one of the most famous early rodeo celebrities. He stopped attending school in fifth grade and started his rodeo life and Wild West shows. After his death he was named the first Black honoree in the National Rodeo Hall of fame. His famous rodeo trick called bulldogging is still referenced today in rodeos across the state, that unforgettable skill of grabbing cattle by the horns and then somehow quickly wrestling them to the ground with gusto. He was known as “The Dusky Demon”.

Bass Reeves, known as the real Lone-Ranger, was born a enslaved person to the household of Arkansas State Legislator William S. Reeves and relocated to Texas in 1846. During the Civil War, Bass accompanied William’s son, George Reeves, while fighting for the Confederacy. After a dispute with his owner Reeves had lived in the Indian Territories, where he mastered several languages of the Cherokee, Creeks and Seminoles tribes.

After slavery was abolished he started a family and had eleven children. The impressive shooting skills he acquired while fighting in the Civil War helped him become the first Black deputy U.S. marshal west of the Mississippi. Reeves is also remembered as one of the great frontier heroes of our country. A fun fact about Reeves was his height, he was hard to miss, standing six feet six inches.

Nat Love is famous for being a Black hero of the Old West. Love was born an enslaved person in Tennessee, where his father worked on plantation’s fields. From a young age he worked large cattle drives in Texas. He had an eye for cattle brands, and understanding the marks and symbols on cattle that ranchers created and used to define which cattle were their own. Love’s eye for these marks was important at the time to prevent property disputes between ranches when cattle roamed free. Love also worked as a cowboy with cattle drivers that derived from the Duval Ranch which was located in the Texas Panhandle.

Love is also known as ‘Deadwood Dick‘ after he won the rope, throw, tie, bridle, saddle, and bronco riding contests in Deadwood, Dakota Territory in 1876.

Daniel W. (80 John) Wallace was born an enslaved person in Victoria County, Texas and since his adolescence he rode the cattle trails, and his impressive work as a wrangler and horse breaker launched his career as a cowboy. Wallace worked for high caliber ranches and cattlemen including Winfield Scott and Gus O’Keefe. He valued fairness and hard work and was ranching business-minded; he had convinced his boss to accept cattle as part of his pay, and The Texas State Historical Association’s website states, “He put his accumulated savings toward the purchase of a ranch near Loraine, where he acquired more than 1,200 acres and 500 to 600 cattle.” There is a historical marker in Mitchell County in Texas that recognizes his contributions and achievements toward the Black cowboy legacy.

In 2019 the yee-haw agenda played on the earbuds of people of all ages with Lil Nas X’s Billboard #1 hit, “Old Town Road” and its music video storyline portraying Black cowboys, and the catchy popular lyrics, “I’m gonna take my horse to the old town road, I’m gonna ride ’til I can’t no more.”