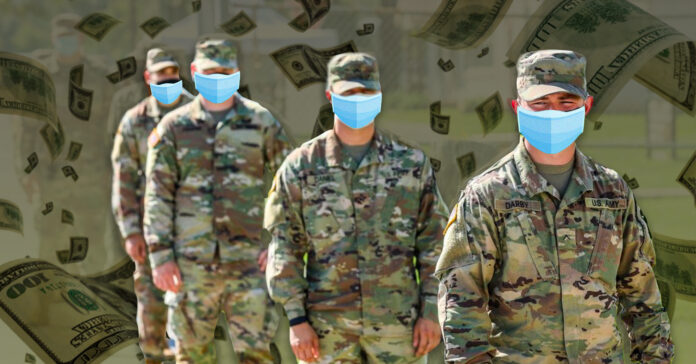 Operation Lone Star, Texas Gov. Greg Abbott’s Border mission has been mostly funded with federal coronavirus aid, around roughly $1 billion that could have been used to strengthen the country’s response to the ongoing pandemic.

While Abbott has repeatedly rerouted state money to his immigration crackdown  – that has so far only accounted for misdemeanor trespassing charges – more than 86,000 people in the state have died from the public health crisis.

Operation Lone Star launched in March 2021 and relies on extensive and expensive deployments of National Guard troops. So, who has been paying for the governor’s program?

According to The Washington Post, Texas eased the financial burden of the operation using money received under a 2020 law meant to help states battle the coronavirus. The state transferred $1 billion from its public health and safety agencies and to the governor’s office to administer Operation Lone Star.

The money was available because the state had backfilled those same public health and safety agencies with stimulus funds it received from Washington, and the moves were legal under the stimulus law known as the Cares Act, enacted in March 2020.

The practice was allowed since Congress never prohibited states from transitioning their budgets to take full advantage of the Coronavirus Relief Fund, which aimed to o help cities and states pay front-line workers, purchase supplies, and tend to other pandemic needs.

Some states used the money in efforts to stop the spread of the virus, Texas, however, seized the opportunity to redirect their newly found savings for unrelated uses- including immigration enforcement.

Critics say that Texas should have spent its savings far differently – helping Americans who were out of work, at risk of losing their homes, or facing unprecedented financial constraints.

According to The Washington Post, under the first major coronavirus aid package, Texas received more than $8 billion in direct aid. Like other states, it was required to put it to pandemic-related expenses, which it did by providing excess medical capacity at hospitals, purchasing tests and protective equipment, and offering hazard pay to front-line workers, according to state data furnished to the federal government.

However, state officials have also acknowledged that federal covid aid dollars did free up other cash for the immigration crackdown, and in September 2021, they approved an emergency spending bill that appropriated roughly $1.8 billion to oversee border crossings.

But Operation Lone Star has proven to be even more expensive, tapping into more federal aid. By January, state officials transferred roughly $480 million from domestic agencies that had been backfilled with Cares Act money.

The latest transfer for the border initiative will only last through August, after that state leaders will need to drum up additional funds to keep National Guard Soldiers stationed at the border.

State Sen. Juan “Chuy” Hinojosa (D) has questioned one of the governor’s top officials as to “what happens” when the latest tranche of funds runs dry. Pointing out that Operation Lone Star is “costing the state taxpayers about $2.5 million a week.”