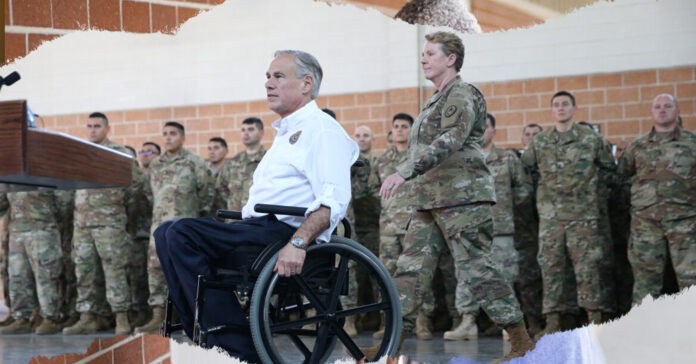 Gov. Greg Abbott’s ‘golden child’ project continues to backfire on him, as Operation Lone Star deals with an alleged civil rights violation investigation led by The Department of Justice.

The Legislature directed more than $3 billion to border measures, a bulk of which has gone to Operation Lone Star, a border mission Abbott launched last year, to combat human and drug smuggling.

The state has deployed more than 10,000 National Guard members and Department of Public Safety troopers to the border with Mexico and built some fencing.

During the last year, the operation has dealt with a large amount of criticism after several news outlets outlined a series of problems with the mission.

An investigation by the Tribune and Army Times detailed troubles with the National Guard deployment, including reports of delayed payments to soldiers, a shortage of critical equipment, and deplorable living conditions – all of which traced back to suicides by soldiers tied to the operation.

Another investigation by the Tribune, ProPublica, and The Marshall Project found that state officials included arrests with no connection to the border and statewide drug seizures in order to tout the operation’s accomplishments – with trespassing cases representing the largest share of the operation’s arrests.

And now, according to records obtained by ProPublica and the Tribune through the Texas Public Information Act, Operation Lone Star is facing alleged civil rights violations.

In an internal email in May, DPS officials said that the DOJ was seeking to review whether Operation Lone Star violated Title VI of the Civil Rights Act of 1964, which bars discrimination on the basis of race, color, or national origin by institutions receiving federal funding, as reported by ProPublica.

Confirming the email, the Texas Department of Criminal Justice sent a letter on Friday to the state’s attorney general about the “formal investigation” of Operation Lone Star by the DOJ. The letter said the DOJ is investigating  whether the state agency is subjecting people who are arrested as part of the border operation to “differential and unlawful conditions of confinement based on their perceived or actual race or national origin.”

Abbott’s border mission has been under scrutiny since the beginning, state and federal lawmakers as well as civil rights and immigrant groups have repeatedly called for investigations into Operation Lone Star.

“Operation Lone Star is targeting individuals for enhanced punishment and subjecting them to a separate state criminal system that is created specifically for this purpose that is riddled with civil rights violations,” said Kate Huddleston, staff attorney for the American Civil Liberties Union.

According to ProPublica, Abbott’s office has said the arrests and prosecutions under the operation “are fully constitutional.”