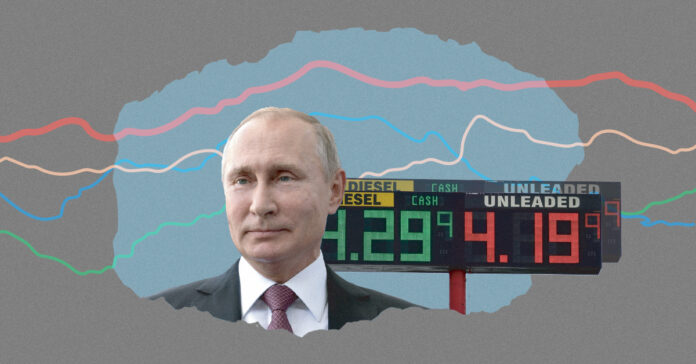 WASHINGTON, March 9 (Reuters) – President Joe Biden’s strategy in grappling with the domestic fallout from gasoline price increases is for Americans to direct their anger at one man: Russian President Vladimir Putin.

Biden and his administration have coalesced around the phrase “Putin price hike” to describe the energy inflation challenges created by Russia’s invasion of Ukraine and retaliatory Western sanctions.

“I’m going to do everything I can to minimize Putin’s price hike here at home,” Biden said in a Twitter post on Tuesday.

The move is likely to drive up U.S. pump prices that have already risen past $4-per-gallon in many places. This stands to pose a political problem for the Democratic president, one Republicans are eager to seize on ahead of November midterm elections in which control of Congress is at stake.

So far, the White House is encouraged by Americans’ response to the Russian oil ban.

A Reuters/Ipsos poll conducted on Monday and Tuesday found that some 80% of respondents – including solid bipartisan majorities – said Americans should not buy oil or gas from Russia during the conflict even if it causes gasoline prices to increase. Read full story

“Americans across the country understand that there’s a price for the sanctions that we are taking to exact pressure on Putin and support the president’s approach,” a senior administration official said, speaking on condition of anonymity.

Still, those figures could shift against Biden as gas prices rise. The administration has already begun looking at scenarios in which oil tops $200 a barrel, a second senior administration official told Reuters.

The White House is counting on Americans, appalled by images of Ukrainian civilians being attacked by Russian forces, seeing the real culprit as Putin. Biden offered a blunt message to reporters on Tuesday as he traveled to Fort Worth, Texas.

“They’re going to go up,” Biden said of gasoline prices. “Russia is responsible.”

Oil prices have surged more than 30% since Russia invaded Ukraine and the United States and other countries imposed a raft of sanctions. Read full story

Republicans hoping to win control of Congress from Biden’s party in November have been unrelenting in their criticism of his handling of the energy issue.

In recent weeks, they have begun selling stickers that can be placed next to gas pump prices, depicting Biden pointing and saying: “I did that.”

Republicans say Biden has the power to unleash far more energy production than is currently taking place in the United States, while administration officials say U.S. oil companies are not taking advantage of all available drilling permits.

The Biden administration is considering a variety of options to try to blunt the impact of high pump prices but is realistic about the pain to come.

“Obviously there are scenarios in which they could go higher. We are trying to make sure that those scenarios don’t … happen, and (are) trying to do our best to mitigate the effects of Russian aggression,” the second official told Reuters.

Asked if the Biden administration could enact a “gas tax holiday” or provide other direct payments to consumers, this official said: “We’re right now looking at … all the tools that we have available.”

The official also said coordination with countries around the world, including on the release of strategic oil reserves, would continue even as the administration works with domestic producers on moves to boost production at home.

The official said the administration was not considering a ban on U.S. energy exports.