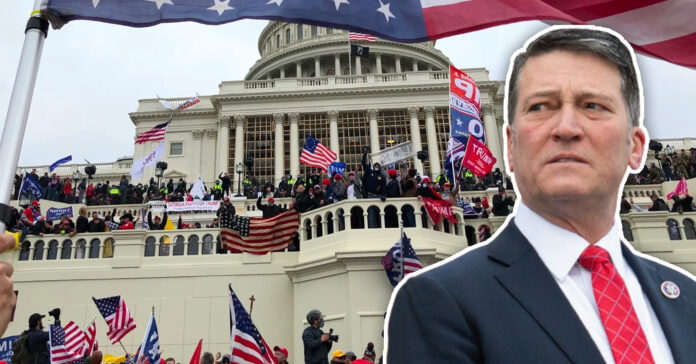 During the Jan. 6 attack, seditious conspiracy group, Oath Keepers, exchanged messages about Rep. Ronny Jacksons’ security as rioters overtook the building, raising suspicion amongst the House committee in charge of investigating the riot.

On Monday, the committee released letters directed toward their colleagues, Jackson, Rep. Mo Brooks of Alabama, and Rep. Andy Biggs of Arizona, encouraging them to cooperate with the investigation, saying it is a “patriotic duty for all witnesses.”

“We urge our colleagues to join the hundreds of individuals who have shared information with the Select Committee as we work to get to the bottom of what happened on January 6th,” read a joint statement issued by the committee’s chairman, Rep. Bennie Thompson, and vice-chair Liz Cheney.

According to The Dallas Morning News, the letter cites messages from the Oath Keepers that show specific interest in Jacksons’ whereabouts and safety.

“Ronnie Jackson (TX) office inside Capitol – he needs [Oath Keeper] help. Anyone inside?” to which another individual responded with “Dr. Ronnie Jackson – on the move. Needs protection. If anyone inside cover him. He has critical data to protect.”

Jackson was even on the radar of the Oath Keepers’ leader Stewart Rhodes who responded “Help with what?” followed by “Give him my cell.”

The committee finds the group’s interest in members of Congress suspicious.

“And the exchanges above raise several specific questions for you: Why would these individuals have an interest in your specific location? Why would they believe you ‘have critical data to protect?’ Why would they direct their members to protect your personal safety? With whom did you speak by cell phone that day?” the committee wrote.

The letter goes on to say that if Jackson had no contact with the individuals then who else would have informed them of his security need or location?

The committee wishes to discuss with Jackson his role in the rally, wishing to record his firsthand observations from that time, including the reactions and statements made by his colleagues at the moment.

Jackson strongly criticized the committee, calling it “illegitimate,” and stating their intentions were malicious. Characterizing the whole thing as a  “witch hunt,” denying to participate in the inquiry.

“I do not know, nor did I have contact with, those who exchanged text messages about me on January 6,” Jackson said.

“The committee’s attempt to drag out a manufactured narrative illustrates why the American people are sick of the media and this partisan Committee’s use of January 6 as a political tool against conservatives they do not like. For these reasons, I will not participate in the illegitimate Committee’s ruthless crusade against President Trump and his allies.”