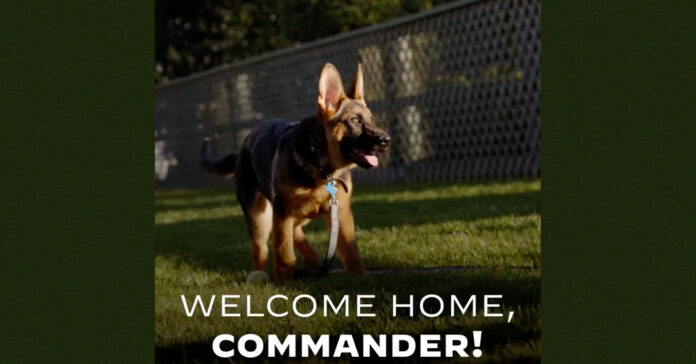 Joe Biden, President of the United States of America, presented on Monday “Commander”, a German Shepherd puppy that will be joining the family of pets that accompany him and his wife, Jill Biden, during his tenure at the White House.

Last June, the Biden’s announced the death of “Champ”, another German shepherd who had been with the family for the past 13 years. According to them, “[Champ] loved nothing more than curling up at our feet in front of a fire at the end of the day, joining us as a comforting presence in meetings, or sunning himself in the White House garden. In his younger days, he was happiest chasing golf balls on the front lawn of the Naval Observatory or racing to catch our grandchildren as they ran around our backyard in Delaware.”

“Welcome to the White House, Commander,” Biden wrote on his Twitter account and accompanied the message with a photograph of the puppy playing with a ball.

“Commander” won’t be the only dog part of the Biden family, as in 2018, they adopted Major (who had to leave the White House after he bit two people at the presidential residence, he’s now staying with some family friends).

Jill Biden, first lady of the United States, announced earlier this year that a cat will be joining her family of pets.

Biden reinstated a presidential tradition of having a pet in the White House. Barack Obama (2009-2017) had two Portuguese water dogs, Bo and Sunny, while his predecessor, George W. Bush (2001-2009) lived with three dogs and a cat. Donald Trump (2017-2021) was the exception, becoming the first president in over a century who did not have a dog.