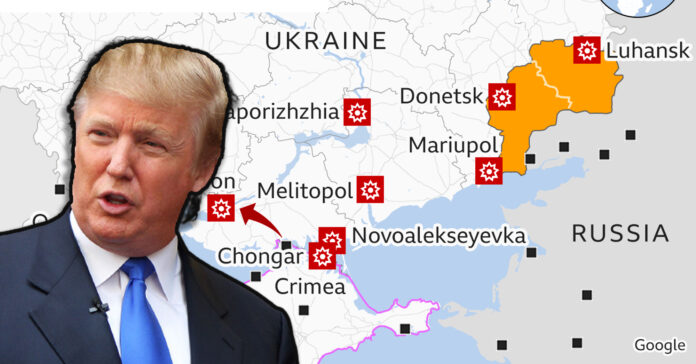 On Wednesday night, former President Donald Trump slipped up during an interview with Fox News.

Laura Ingraham, host of “The Ingraham Angle” corrected Trump after he suggested the U.S. Military was invading Ukraine.

“You know what’s also very dangerous is you told me about the amphibious attack by Americans,” Trump said. “You shouldn’t be saying that, because you and everybody else shouldn’t know about it, they should do that secretly, not be doing that through the great Laura Ingraham.”

“No, those are the Russians,” Ingraham replied.

“Oh, I thought you said that we were sending people in,” Trump said, adding, “That’ll be next.”

Earlier on the show, Trump told Ingraham that Putin hadn’t invaded Ukraine during his administration for a very good reason, “I’ll explain that to you someday.”

Then Trump suggested that Russia’s invasion of Ukraine “all happened because of a rigged election.”

After that, Ingraham rushed to cut their interview short.

“President Trump, we actually have — just, hold on, I’m so sorry to interrupt you — but we have, we’re going to the Pentagon, I believe?” Ingraham said. “Ukraine, sorry. Ukraine is speaking at the UN.”