Home National Republicans, In Texas And The US, See Civil War Between Trump And...
Facebook
Twitter
Email 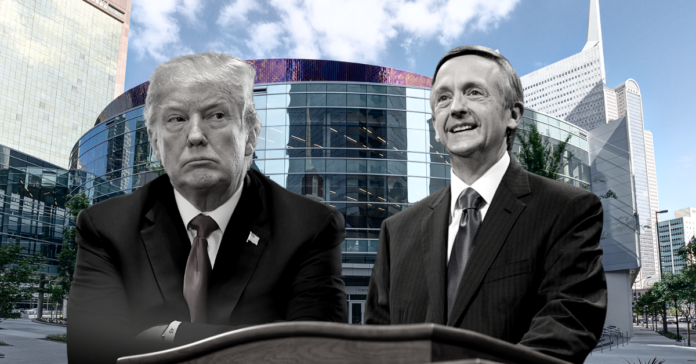 One prominent Dallas evangelical leader, Rev. Robert Jeffress, said he will hold off on endorsing former president Donald Trump before the Republican party nomination, despite being an outspoken supporter.

“I think Republicans may be headed for civil war, and I see no reason to get involved,” Jeffress told The Dallas Morning News. “If he is the nominee, which I fully expect him to be, I will happily and enthusiastically support him.”

Jeffress, the pastor of Dallas’ First Baptist Church, called Trump “a great friend” but because sees combative infighting within the party in the primary ahead of the 2024 election, and claims he wants to stay out of it.

Texas Republican Rep. Troy Nehls, who won reelection and was endorsed by Trump, appeared to shed doubt on the viability of the Trump 2024 run, and also indicated that the former president could be a drag down-ballot on the GOP in a recent radio interview.

“There’s just a lot of negative attitudes about Trump,” Nehls said but added that he “will support him as the 47th president,” in a statement to CNN.

Other Republicans around the country see a candidate in president Trump who has so much baggage — political, legal, and otherwise — that even those who supported him in the past may not do so in 2024.

Roughly 50 percent of Americans think Trump should face criminal charges for his role in the deadly insurrection, according to a PBS NewsHour/NPR/Marist poll earlier this year, and a growing number of Republicans who still think favorably of him would prefer a different candidate be the nominee.

Meanwhile, DeSantis won his gubernatorial reelection bid by a wide margin. DeSantis is the most popular alternative to date, according to a recent New York Times/Siena College poll.

And a recent Quinnipiac University Poll, sixty percent of those polled see Trump’s 2024 run as a negative for American politics, and likely GOP voters are split between Trump and DeSantis for the nomination.

According to the Pew Research Center, in 2020, roughly 71% of white Americans who attended religious services at least once a month voted for Trump, and presumably will support his 2024 bid.

And the news for Trump gets worse — nearly two-thirds of prospective GOP primary voters under 35 years old, including those with college degrees — say they will vote against Trump in 2024.

Trump likely believed that a robust number of GOP midterm victories would catapult him into a third presidential campaign with the projected red wave. Instead, the aftermath of the election raises questions about his political future as a vast majority of the candidates he endorsed lost.

And he appears to rapidly be digging his own political grave with his fraternization with anti-semites, his continuing legal troubles, and his connection to the Oath Keepers and other right-wing paramilitary organizations who are co-mingling with neo nazi and other far-right groups.

The former president’s inaction on Jan. 6, 2021, as well as his blatant disregard for a peaceful transition of power, appears to have contributed to the decline in support, especially among younger and college-educated Republicans.

Nearly 20 percent said he “went so far that he threatened American democracy,” and he only made things worse only with his continual election denial rallies.

So, if Trump wins the GOP nomination, Republicans would most likely lose in 2024, based on a cursory historical analysis of previous one-term presidents’ political paths. Going back to John Adams, 13 presidents served only one term, and only one successfully ran for reelection.

The first Democrat elected to the White House after the Civil War, Grover Cleveland, was the only former president to lose and win a second term four years after his first term ended. He won in 1885 and then again in 1893, and served as our 22nd and 24th POTUS.

If Trump loses the nomination, there is speculation that he will attempt to run as a third-party candidate — which would split the vote on the right — and hand the election to the Democrats. In every major election featuring a third-party presidential candidate, the independent caused the party he was most aligned with to lose.