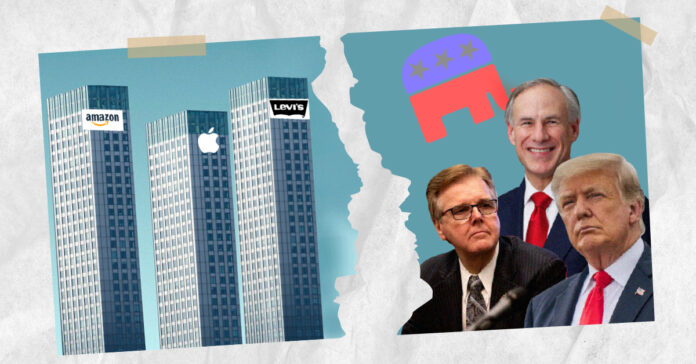 In the grand kickball game of politics, big business interests have been on the Republican team for decades thanks to the GOP’s policies of less regulation and low corporate taxes. However, thanks to the sharp right social turn of the Republican Party, it looks like big business might be ready to break up with their old allies. At the very least, companies seem ready to thwart some of the mot egregious examples of restrictions on their employees’ freedoms.

Texas has been attracting many companies like Apple, Amazon, and Hewlett Packard with the state’s promise of tax breaks and less interference. At least 113 California companies alone relocated to the Lone Star State between 2018 and 2021, bringing in lots of jobs and revenue.  Once they got here, those companies started to realize that the hostile social environment was going to be a detriment to their ability to hire the best people.

Recently, Amazon, Citigroup, Salesforce, Apple, Bumble, Levi’s, GoDaddy, Match, and Hewlett Packard have all vowed to fly employees out of the state to procure abortions in blatant defiance of the new draconian restrictions passed in September as well as the expected full ban if the Supreme Court strikes down federal protections next month. Some, like Tesla CEO Elon Musk, have been more silent on the issue. This could come with significant legal risk for the companies as the current law allows anyone to sue a person or entity that helps circumvent the six-week abortion ban for $10,000 plus legal expenses. That said, these are companies with enormous resources when it comes to battling lawsuits.

Nor has Texas Republicans’ war on trans youth endeared them to corporations. In a special session last year, a law was passed banning trans students from participating in high school sports. Governor Greg Abbott went even further with an order saying that parents who sought gender-affirming care for trans and non-binary children should be investigated for child abuse.

More than 60 companies, including Apple, Google, IBM, and Meta, published an open letter to Abbott decrying his actions.

“We call on our public leaders — in Texas and across the country — to abandon efforts to write discrimination into law and policy. It’s not just wrong, it has an impact on our employees, our customers, their families, and our work.”

It’s unclear how much this rhetoric is affecting the large amount of donations that these companies usually fuel toward Republicans. Many Texas companies joined in a pledge to not support politicians that pushed the Big Lie that the 2020 election was stolen or otherwise corrupt. While they may have kept to the letter of the promise, a lot of them skirted the issue by moving the money through lobbying firms. Amazon alone has pushed thousands of dollars to election deniers through personal accounts instead of corporate ones. AT&T was caught donating $100,000 to Abbott’s re-election campaign literally the day he pushed for voter rights and access restrictions based on the myth of election fraud.

It’s clear from their public statements that these companies would rather Texas abandon oppressive and destructive social practices like abortion bans and attacking LGBT kids. It hasn’t dried up the money pipe just yet, though.