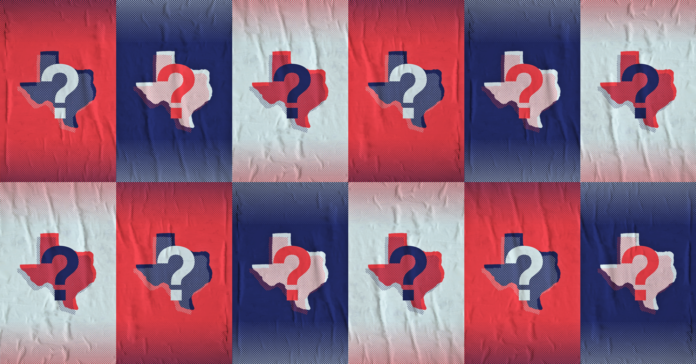 This opinion piece was written by Brandon Rottinghaus, political science professor at the University of Houston.

The spread of COVID-19 and the resulting shelter-in-place orders shadowing most counties in Texas have created a social change not seen for more than a century. These changes have brought spiking unemployment, medical emergencies difficult to fathom even a month ago, and even — on the bright side — delivery margaritas. These strange times have also brought several questions the state will confront in the next few months.

Will we see the return of a strong Texas governor?

On paper, the governorship is a weak office, made robust only by the exercise of powers of the individual who resides there. When he was governor, Rick Perry flexed the muscle of the most historically beleaguered and mistrusted office in Texas government, using his administrative, legislative and appointment powers to push his politics and policy. Gov. Greg Abbott took a more restrained approach early in his tenure but is emerging in the Perry mold to confront the spread of the virus in Texas, dashing off order after order to suspend rules and empower the government to confront the crisis and guidelines for reopening Texas businesses. When the crisis is over, will we see the same strong governor? Hiccups concerning the intent of his orders drew criticism and his measured response — including Texas’ conspicuous lag in testing — drew skepticism about his leadership during the first month of the crisis.

Will the state release certain prisoners from jails?

Abbott’s executive order suspending provisions of the Texas Constitution barring individuals with a prior conviction involving violence was met with applause among Republicans and concern among Democrats. Local officials, like those in Harris County, argue the release of certain nonviolent inmates is necessary to protect current incarcerated populations through community spread of COVID-19. An outbreak of the virus would be a public health disaster. And judicial officials complain the blanket order strips them of their judicial independence. Lawsuits are pending.

Does the governor have this power? A truckload of fruit from the Rio Grande Valley decades ago gives a surprising answer.

Gov. W. Lee “Pass the Biscuits Pappy” O’Daniel asked the attorney general in 1939 if he had the power under the Constitution to stop a truck load of citrus fruit, arguing producers could not make enough profit with this small seven thousand pound truck and insurrection was imminent from growers and truckers should the shipment not be allowed. The attorney general scolded the governor, replying that the Texas constitution was clear that only the legislature could suspend the laws and the bluebonnet governor could only declare martial law to enforce the laws of the state, not to make new ones. Lawsuits in the 1980s confirmed this finding, but current suits will reveal the scope of the power of the modern Texas governor.

Will the Railroad Commission limit the production of crude oil?

The price of a barrel of crude oil is lower than the price of a double whisky, a bruising reality for Texas producers and refiners and oil patch workers from El Paso to Beaumont. The Railroad Commission, which ironically has no purview over railroads but absolute oversight of oil production, has considered imposing limits on what wells pump. The commission attempted this action in the late 1970s as demand fell and production rose. The process was complicated, fraught with inaccurate estimates from producers, and, worst of all, slow. Regulator reluctance 40 years ago to interfere in private business to override contracts between people, producers, and pipelines extended the crisis. Do present conditions call for a similar approach with better tactics?

Will the right to an abortion be limited during the COVID-19 crisis?

Abbott’s executive order suspending all nonessential medical procedures and Attorney General Ken Paxton’s clarification that the ban applies to abortions and abortion clinics generated controversy which spurred lawsuits and a stress test for abortion rights in an era of conservative-leaning courts. If the courts find these rights can be limited during emergencies, it is another in a series of restrictions to abortion access. If the courts find fault with Texas’ defacto ban, it follows recent cases that blocked Texas from shuttering clinics that perform abortions.

The state’s budget is driven by sales taxes, and the revenue from this is greatly pinched by most people flattening the epidemiological curve by staying inside their residences. A significant drop in sales tax revenue combined with budget holes from vehicle rentals and taxes on gas at the pump and a rise in unemployment mean a cratering of the Texas budget by up to $30 billion. Texas may not have enough to pay its bills in this biennial budget, and the economic crunch will certainly choke the state’s next biennial budget. This drop will also hurt city and county governments that rely on sales taxes to fund public works. How bad this effect is depends on the impact of the federal stimulus bill, whether and how much legislators siphon from the Economic Stabilization Fund (the state’s rainy day fund created for these emergencies), and how long health concerns about the spread of the virus keep most Texans inside.

Will we vote by mail?

Shelter-in-place orders have ground mobility to a halt, but democracy stubbornly marches on. Elections have been run during wars before, but the invisible enemy makes it harder to recruit poll workers and convince voters that polling places are safe. Is voting by mail the answer, as some in Texas have suggested? Mail balloting might be a solution but has tradeoffs. Several western states vote exclusively by mail, and Texans over 65, who are overseas, or who qualify in other ways can get a mail ballot in Texas. Mail voting states see higher turnout and better-informed voters since voters can spend more time getting comfortable with the ballot. Yet mail ballots are returned at lower rates for minority and younger voters and are rejected at higher rates (due to signature matching issues) for minority voters. Concerns about fraud through “vote harvesting” have restrained such expansion in Texas, cemented by stiff laws preventing this, making the shift to mail ballots more complicated. Also complicated: the price. The federal stimulus bill funneled $20 million to Texas to conduct elections in the midst of the pandemic, but this is as substantial as a flea in a clover field. The state or local governments would have to foot the rest of the bill to facilitate these changes in dour economic times. The bad news is that we’ve been here before. The state has weathered and mobilized through several crises: natural and human-made disasters, economic calamities, and family squabbles about which city has the best breakfast taco. The good news is also that we’ve been here before. Texas has shown resilience through several economic and health crises and has met each one with determination and solidarity. Texas will find her stride again.