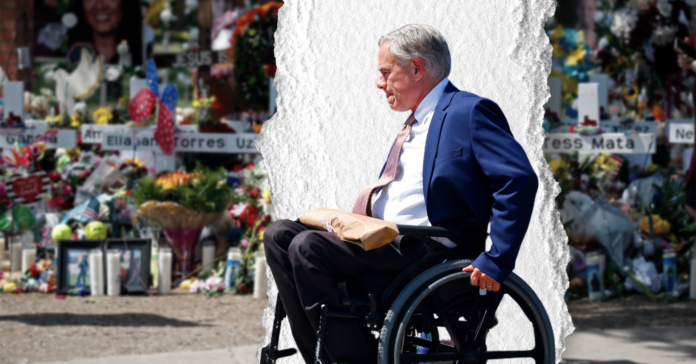 Contrary to earlier statements, Gov. Abbott not only attended a fundraiser following the Uvalde school massacre, but stayed for several hours.

The day after the Uvalde shooting, Abbott claimed that the stop at the fundraiser was because “I wanted them to know what happened and get back to Austin so that I could continue my collaboration with Texas law enforcement to make sure all the needs were being met here in the Uvalde area.”

On Thursday, Abbott campaign spokeswoman Renae Eze told the Dallas Morning News, “Unlike Beto O’Rourke who took advantage of the tragedy in Uvalde by increasing his fundraising efforts and resorting to political stunts, Governor Abbott canceled all political activity, including fundraising.”

But an analysis by the Dallas Morning News of campaign finance reports and flight-tracking records demonstrate that Abbott flew on Texas businessman Ricky Baker’s jet to Huntsville and arrived at 4:52 p.m. on May 24, was driven two miles to a fundraiser at Jeff Bradley’s home and raised as much as $50,000. He didn’t depart the city until 7:47 p.m.

Ricky Baker has given Abbott nearly $120,000, including $70,000 of in-kind contributions through use of the private jet. Eze did not dispute the flight-tracking information from the day of the massacre.

Abbott has been criticized in the wake of the Uvalde massacre regarding his decision to go forward with the fundraiser, his inaccurate early statements regarding the initial police response and his deferral of policy solutions to legislative committees.