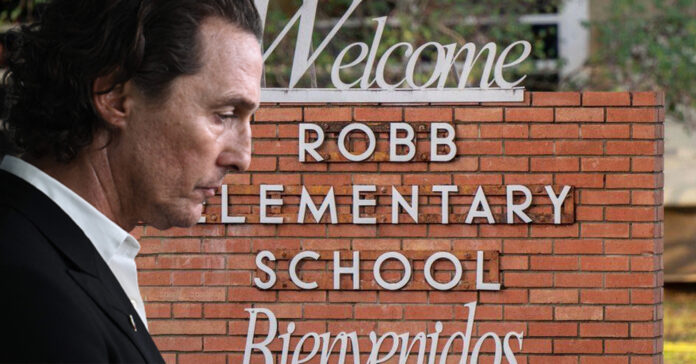 On Tuesday’s episode of Fox News ‘Special Report,’ McConaughey discussed his participation at the White House Press Briefing session, where he took control of the microphone and gave an emotional speech to address the lives of the children who were killed during Uvalde’s shooting last month.

“Every single family that lost a loved one or a child said: I just want some way for the loss of my loved ones’ life to matter,” McConaughey said, recounting his visit to Uvalde.

“I think that is what we are on the cusp off here in D.C. today. How can we make that happen?”

In his op-ed with Austin American-Statesman, McConaughey touts background checks, red flag laws, raising the age of getting an AR-15 to 21, and increasing the waiting period to purchase an AR-15, as reasonable first steps towards combating gun violence in the nation.

When being asked by Baier if he thought it was time to change things, the Hollywood actor said the consensus phrase being thrown around Capitol Hill is that “this time it’s different.”

McConaughey then recounts his encounters in Uvalde with responsible gun owners and how they all agree on new gun laws that make it harder for the bad guys to get guns. In his eyes the country is actually reaching some middle ground: “Damn right, I believe that.”

The last piece of the puzzle would be for the masses to regain control of the narrative: “It’s time to pull off the veil over the masses’ eyes.”

McConaughey believes the country is more united than it is being led to believe. To move forward, we would need to stop “being a nation of counter punchers,” because that is not a way to move forward and it does not have a vision.

To finish the interview the Academy Award winner leaned towards empathy, and human emotion rather than politics. He turns to the Fox News host and reaches a middle ground: they are both fathers.

“I bet you and I can get something done talking about being dads and giving a damn about our kids and their future. I bet we can come to an agreement on that and on some issues as well,” McConaughey continues.