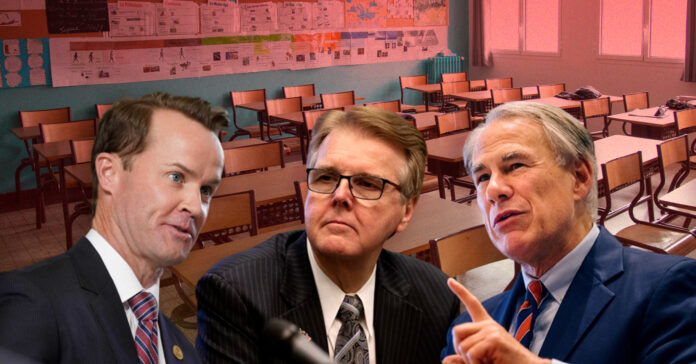 “Anybody who shoots somebody else has a mental health challenge. Period,” said Gov. Greg Abbott to Texans after the nation suffered the second deadliest school shooting in history.

The GOP party, led by Abbott, continues to spin the narrative that the main problem for mass shootings is mental health access. Even though Texas is in dire need of funding in this area, Texans are concerned state leaders are tackling only a symptom of the disease, and ignoring the cure.

“We as a government need to find a way to target that mental health challenge and do something about it,” said Abbott.

His plan comes in response to Lt. Gov. Dan Patrick’s $50 million request to immediately purchase bulletproof shields for school police departments – a request Phelan had initially been pushing back against.

“Your recommendation to dedicate $50 million toward outfitting local school law enforcement with bulletproof shields is a worthwhile goal to that end, and you have my full support in that endeavor,” Phelan said in a letter to Patrick.

Abbott has resisted calls for a special session, has rejected calls for limiting gun rights, and praised Phelan and Patrick’s efforts toward beefing up school security and improving mental health responses.

“This is a great start to delivering not only on the needs of the Uvalde community, but for schools and communities across Texas,” he said.

While Abbott pushes for mental health funding and school safety measures as he did following the Santa Fe shooting, he slashed $211 million from the Health and Human Services Commission (HHSC), which oversees mental health services in Texas, and redirected it to his costly border security operation earlier this year.

These efforts (or lack thereof) on gun reforms in Texas stand in contrast to Congress, which appears on the verge of a bipartisan agreement for modest gun control policies despite decades of dysfunction and stalled movement on the issue.

So while Phelan’s letter addresses this gap in mental health, House Democrats are still critical of the Republican state leadership’s response to the Uvalde shooting.

“The fact of the matter is that guns are the issue. Yes, we need more mental health support and our schools need to be properly upgraded – but those are distractions from the issue at hand: that an 18-year-old was able to legally purchase a weapon of war and use it to slaughter a classroom of children and teachers,” said co-executive director of the Texas Democratic party Jamarr Brown in a statement.

“We don’t see anything in the Speaker’s letter that really addresses how someone accesses a gun, how someone gets training, what those background checks look like? How do we go back to raising the age of when you can access a gun? Those are the things that people are talking about in communities across the state.”

According to a recent poll from Qunnipiac University, the majority of Texans want increased gun restriction laws, about 58 percent, no matter their party line. The poll also shows 93 percent support univesal background checks of gun purchases and 73 percent support raising the minimum age to buy a gun to 21. In Texas, you have to be 21 to purchase a handgun, but it is 18 for long guns, like the AR-15 the gunman used in the Uvalde massacre.