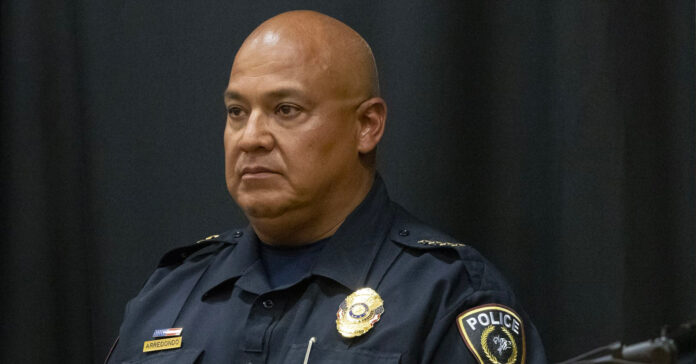 LUBBOCK, Texas, Aug 24 (Reuters) – The Uvalde, Texas, school board on Wednesday fired the school district’s embattled police chief for his much-criticized handling of the response to a shooting rampage that killed 19 children and two teachers in the city three months ago.

The Uvalde Consolidated Independent School District Board of Trustees voted unanimously to fire Pete Arredondo, to the applause of family members of victims who attended. Arredondo, who led a small police force tasked with patrolling school grounds, had been on unpaid administrative leave since shortly after the May 24 shooting.

Arredondo did not attend the meeting. A written statement from his attorney, George Hyde, was emailed toboard members just before the board met. It cited death threats Arredondo has received and what it said was the district’s lack of efforts to provide any protection for him.

Hyde also wrote that the district was in the wrong for dismissing Arredondo, saying it did not carry out any investigation “establishing evidence supporting a decision to terminate” him.

Arredondo has come under scathing criticism for his handling of the massacre at Robb Elementary School inUvalde, a small town in Texas Hill Country, about 80 miles (129 km) west of San Antonio.

Parents of children slain and wounded in the deadliest U.S. school shooting in nearly a decade had demanded the school board dismiss Arredondo.

He was forced to resign his seat on the Uvalde City Council on July 2. Read full story Three weeks later, theboard was scheduled to decide Arredondo’s fate as the school district police chief, but postponed the meeting due to “process requirements” at the request of his attorney.

According to the Texas Department of Public Safety (DPS), Arredondo acted as “incident commander” in charge of law enforcement’s response to the shooting.

DPS officials said 19 officers waited for an hour in a hallway outside adjoining classrooms where the gunman was holed up with his victims before a U.S. Border Patrol-led tactical team finally made entry and killed the suspect. Read full story

Arredondo, they said, chose not to send officers to confront the suspect sooner, believing the immediate threat to students had abated after an initial burst of gunfire in the classrooms.

Arredondo, who oversaw a six-member police force before he was fired, has said he never considered himself the incident commander and that he did not order police to hold back on storming the suspect’s position.

(Reporting by Brad Brooks in Lubbock and Brendan O’Brien in Chicago; Editing by Josie Kao and Leslie Adler)