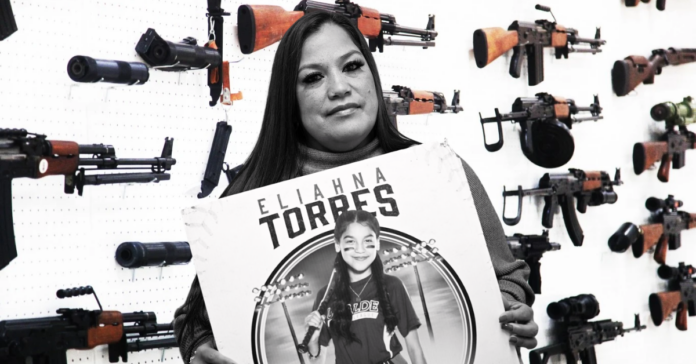 After the horrific massacre at Robb Elementary in Uvalde, Sandra Torres, mother of 10-year-old victim Eliahna Torres, is suing the gun manufacturer of the weapon used by the shooter, along with the gun shop owner, and multiple city entities for their part in the tragedy on that fateful day in May.

After legally purchasing the weapon and ammunition within days of the shooting, the teen gunman killed 21, including 19 students and two educators.

“My baby never made it out of the school,” she told the Dallas Morning News. “There’s no accountability or transparency. There’s nothing being done.”

The suit names the manufacturer of the AR-style semi-automatic rifle that Salvador Ramos used to fire more than 100 rounds in the horrific mass shooting as a defendant. The lawsuit was filed by Torres with help from the group Everytown for Gun Safety.

The company, named Daniel Defense, is based in Black Creek, Georgia. While CEO Marty Daniels called the Uvalde shooting and others like it “pure evil” and “deeply disturbing,” he separated the weapons themselves from the violence at a congressional hearing this summer, saying mass shootings in America are problems to be solved locally.

Also listed as defendants are the City of Uvalde, the Uvalde Consolidated Independent School District, and several law enforcement groups for a “complete failure” to follow active shooter protocols.

The suit claims the victim’s constitutional rights were violated by effectively “barricading them” inside two classrooms with the shooter for more than an hour on May 24. It took law enforcement officers 77 minutes to breach the school and end the rampage.

While a previous joint federal lawsuit was filed by families of three Uvalde shooting survivors two months after the shooting alleged a combination of negligence, intentional choices, and a “culture of noncompliance with safety protocols,” the new Torres suit goes even further.

Just eight days before the Uvalde massacre, Daniel Defense posted an ad on social media to Twitter — featuring an image of a toddler holding a similar weapon to the one used in Uvalde.

“Train up a child in the way he should go, and when he is old, he will not depart from it,” read the post, a biblical proverb, the same day the Robb Elementary shooter turned 18.

The grotesque ad is the type of provocative and controversial marketing that has helped the company become one the largest privately owned firearms manufacturers in the country.

“It wasn’t by accident that he went from never firing a gun to wielding a Daniel Defense AR-15,” Tirschwell said, citing the findings of a report written by an investigative committee from the Texas House of Representatives. “We intend to prove Daniel Defense marketing was a significant factor in the choices that…” the shooter made, he continued.

Also named in the suit is the gun shop Oasis Outback where the shooter bought the weapon along with another AR-15 and ammunition, totaling thousands of dollars, though only one weapon was used in the shooting.

One gun shop patron later told the FBI Ramos “looked like … a school shooter,” according to the report from the Texas House of Representatives.

Ramos, described by classmates as a brooding, anti-social, increasingly agitated teen as a potential “school shooter,” still passed background checks. The gun store owner ignored his demeanor — and his multiple gun orders and multiple trips to the shop for various modifications and a militaristic amount of ammunition — and completed his transactions as the customer asked.

On May 18, “he returned … for 375 rounds of M193, a 5.56mm 55-grain round with a full metal jacket, which has a soft core surrounded by a harder metal.” Two days later, “He returned again to pick up his other rifle when it arrived on May 20 and he had store staff install the holographic sight on it after the transfer was completed,’’ the report said.

While typically immune from crimes committed with their products under federal law, families of victims of the 2012 shooting at Sandy Hook Elementary School in Newtown, Connecticut, were awarded a $73 million settlement from Remington Arms Company.

Remington made the Bushmaster AR-15-style rifle used on Dec. 14, 2012, to kill 20 first-graders and six adults at that elementary school.