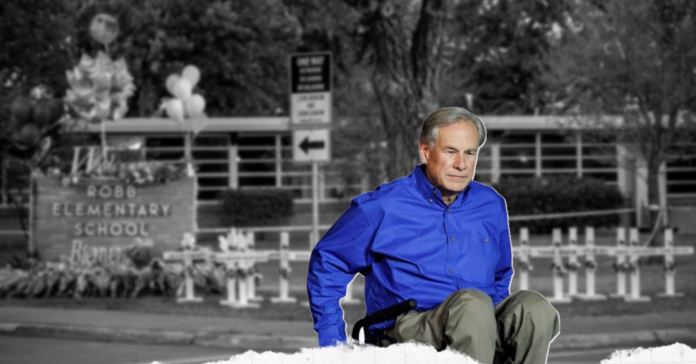 The Uvalde community continues to grieve their loved ones, meanwhile Gov. Greg Abbott has “done nothing” to help them after a gunman brutally murdered 19 children and two teachers on May 24, according to State Sen. Rolando Gutierrez.

He hasn’t even made an effort to attend a single funeral for any of the children, according to his schedule, obtained by ABC News.

“He did not go to one single funeral—and quite honestly, many of the families didn’t want him there,” said Gutierrez, who represents Uvalde, in an interview on Monday with CNN.

He blasted Abbott for declining to visit the town, attend funerals or spearhead investigations following the shooting.

Recent statements from some of the shooting victims’ families also highlight the Governor’s absence.

“For everybody out there getting ready to vote, since this has happened Governor Greg Abbott has yet to reach out,” said Angel Garza, father of 10-year-old Amerie Jo Garza, in a July 13 news conference.  “These guys don’t have compassion for us. They don’t care. [Abbott] doesn’t care that all these children were murdered and these teachers were murdered. Y’all need to realize that.”

In recent interviews, Uvalde Mayor Don McLaughlin has also called on Abbott to return to Uvalde to speak with grieving family members, but has not heard back from the governor in four weeks, as reported by Chron.

In an emailed statement, Renae Eze, spokesperson for Abbott, wrote: “Governor Abbott has been to the community multiple times, visiting with every family who requested a meeting and joining his fellow Texans to grieve and worship at events into June.” She also stated that Abbott and his office have remained in “regular contact” with McLaughlin and Uvalde leaders, adding they speak “on almost a daily basis” to ensure the Uvalde community is receiving support and resources.

According to The Houston Chronicle, the comments have surfaced on the heels of a Texas House committee report showing that nearly 400 law enforcement officers responded to the shooting at Robb Elementary School but none confronted the gunman for more than an hour.

“We have to get to the bottom of this, but it begins at the top in Texas,” Gutierrez said.