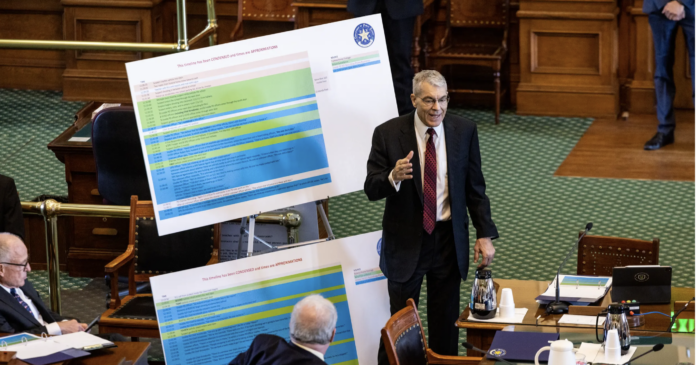 UVALDE — The Texas Department of Public Safety is reviewing how 91 state troopers and Rangers responded to the Robb Elementary School shooting to determine if they violated any policies or laws.

The agency’s announcement Monday that it had formed an internal committee last week for the inquiry comes nearly two months after an 18-year-old gunman killed 19 students and two teachers in Texas’ worst school shooting — and one day after a Texas House panel report found that 376 law enforcement officers from several agencies descended on the scene in a chaotic, uncoordinated response that stretched for 73 more minutes before the gunman was confronted and killed.

The House panel’s report echoed criticisms made previously by police tactics experts: that instead of following the accepted doctrine that officers immediately confront active shooters, police at Robb Elementary retreated after coming under fire and then waited for backup. By the time the shooter was killed, 376 law enforcement officers from several local, state and federal agencies has shown up to the scene.

Roy G. Taylor, a police chief in North Carolina who’s worked in law enforcement for 40 years, said he was surprised by the delayed nature of DPS’ internal inquiry. He said its timing likely has to do with politics.

“As much national scrutiny as this event got … the governor was on it the first day,” Taylor said. “It would look like the governor would have whichever state law enforcement agency that was kind of overseeing [the investigation] … would have been putting pressure on them to move as quickly as they possibly could to get some facts and make some determinations.”

“The ongoing criminal investigation by the Texas Rangers has included examining the actions of every member of law enforcement agency that day, so we’ve been in the process of doing this from the very beginning,” department spokesperson Travis Considine said.

After they’re done with that investigation, they will turn it over to Uvalde County District Attorney Christina Mitchell Busbee, who will decide if any criminal charges should be filed against any law enforcement officers.

“The criminal investigation always takes precedent but is typically followed by a comprehensive administrative review of this nature,” Considine said of the inquiry.

The internal DPS committee will also determine “where the department can make necessary improvements for future mass casualty responses,” according to a department statement.

As that DPS criminal inquiry has unfolded outside of public view and for weeks before the new internal committee was formed, DPS Director Steve McCraw has been among the most vocal critics of the local police response to the massacre. He has particularly focused his criticism on Uvalde schools police Chief Pete Arredondo, whom McCraw has said was the incident commander at the scene. At a Texas Senate committee hearing last month, he called the law enforcement response an “abject failure” and said police could have stopped the shooter three minutes after arriving if it weren’t for the indecisiveness of Arredondo, who he said “decided to place the lives of officers before the lives of children.”

Kevin R. Madison, a law enforcement expert based in Travis County, said the Uvalde massacre is the first time in his career that he’s seen as much finger pointing among law enforcement agencies.

“It’s unusual in my almost 10 years of law enforcement,” Madison said. “To come out publicly with the condemnation of the actions taken by those police officers there and Pete Arredondo, I find that it’s very unusual. I have never seen it before.”

[“If there’s kids in there, we need to go in”: Officers in Uvalde were ready with guns, shields and tools — but not clear orders]

The Texas Tribune last month reviewed a video showing the hallway outside the classrooms where the massacre occurred. Despite the urgent pleas from law enforcement and parents amassed outside the school, officers stayed put outside rooms 111 and 112, stationed on either end of a wide hallway until a tactical team from the U.S. Border Patrol eventually breached the classroom doors and killed the gunman.

Arredondo has disputed that he was in charge of the entire law enforcement response at the scene. And the House report said failures went beyond local police. The report said 376 law enforcement officers from several local, state and federal agencies lacked clear leadership, basic communications and sufficient urgency to take down the gunman. The House committee investigation said that in the absence of a strong incident commander, another officer could have — and should have — stepped up to the task.

“These local officials were not the only ones expected to supply the leadership needed during this tragedy,” the House report said. “Hundreds of responders from numerous law enforcement agencies — many of whom were better trained and better equipped than the school district police — quickly arrived on the scene.”

According to the video reviewed by the Tribune, a special agent from DPS who urged officers to go into the classroom stayed for six minutes before leaving to clear other rooms, rescuing a student found hiding in a bathroom. More troopers arrived just minutes or seconds before the tactical team from the Border Patrol stormed the classroom but did not participate in the breach.

[What we know, minute by minute, about how the Uvalde shooting and police response unfolded]

Uvalde police Lt. Mariano Pargas, who was the acting chief for the city’s police department on the day of the shooting, was put on administrative leave, Mayor Don McLaughlin announced on Sunday. Arredondo, the police chief of the school district’s police department, is also on leave.

State Sen. Roland Gutierrez, who represents Uvalde, told the Tribune that the timing of the new internal DPS investigation is “most disturbing.” The Democrat senator plans to call on Gov. Greg Abbott and Lt. Gov. Dan Patrick to direct the appropriate legislative committees to begin their own external investigation of DPS’ activities on the day of the massacre. Gutierrez, who’s also suing DPS over the release of records related to the shooting, said McCraw should be placed on leave in the meantime.

“It’s astounding to me that we’re still talking about reports and processes rather than talking about accountability,” Gutierrez said. “Steve McCraw directly reports to the governor of this state, and the governor of the state has, I’m sure, seen these videos beforehand … and yet he has still failed to ask for any kind of accountability from Director McCraw or anybody within that agency, and that is most sad.”

[A year before Uvalde shooting, gunman had threatened women, carried around a dead cat and been nicknamed “school shooter”]

The House committee report released Sunday described how the shooter prepared and armed himself, how the school district fell short on campus safety preparations and how law enforcement moved too slowly to end the massacre. It provided the most thorough account yet of the May 24 school shooting and the failures of law enforcement.

Abbott in a statement Monday called the House committee’s findings “beyond disturbing” and said there are critical changes needed as a result.

“With multiple investigations still ongoing, including those by the Texas Senate, FBI, and Texas Rangers, we will begin working with the legislature to develop and implement the necessary changes to improve public safety, school safety, and mental health assessment and treatment,” Abbott said.

The governor didn’t specify what changes he would prioritize.

“The report says that if you’re not willing to put the lives of the people you serve or of those children before your own, in my view you should find another job,” she said.

The House committee members on Sunday also didn’t detail what laws the Legislature could propose next year in response to the report. State Reps. Dustin Burrows, a Lubbock Republican who chairs the committee, and Joe Moody, an El Paso Democrat, did not respond to requests for comment Monday.

A spokesperson for U.S. Customs and Border Protection, which oversees the U.S. Border Patrol whose tactical team eventually killed the gunman, said in a statement Monday that the federal agency is reviewing its agents’ response to the shooting. The spokesperson said the agency is working with “other investigative agencies and the Department of Justice to review the entirety of this incident.”

Once the CBP review is complete, it will be made public “when appropriate,” the spokesperson said.

“CBP will continue to work with our federal, state, and local partners to answer the difficult questions on what went wrong and how we can improve our responses,” the CBP spokesperson said. “We owe this to the Uvalde community, and the nation.”