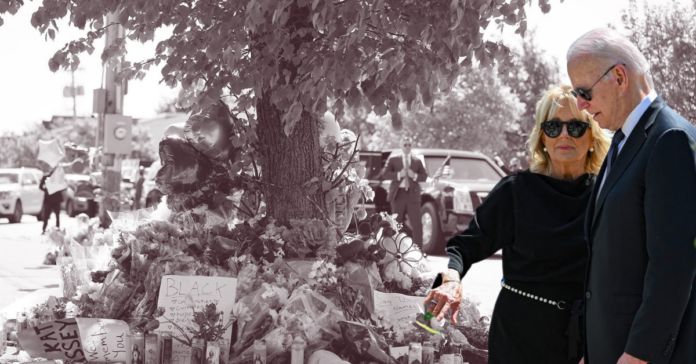 “Do something!” A frustrated spectator from Uvalde shouted at President Joe Biden who visited the south Texas town in an attempt to comfort families after the nation’s deadliest school shooting in a decade.

“We will,” responded Biden.

On Sunday, the president attended noon Mass at Sacred heart Catholic Church, joining 600 people in their prayers for Uvalde. He also met with survivors and victims’ of loved ones at an event center and hours before he stopped at the memorial site outside the school.

“To everyone impacted by the horrific elementary school shooting in Uvalde, Texas: We grieve with you.” Biden Tweeted Sunday evening. “We pray with you. We stand with you. And we’re committed to turning this pain into action.”

Even though Biden wiped away tears, left flowers, and spent hours consoling families, there are some who have little faith that things will change.

Bystanders, Laura Tafoy and her husband, appreciated the president’s visit however questioned how much change he could actually bring for gun regulations in Texas.

“If you’re 18, it’s easy to buy a gun, it’s wrong.” Tafoya, 60, said to The Houston Chronicle.  “There needs to be tough background and psychological checks. Biden will make a decision, but he doesn’t have all the power.”

“People have little hope,” her husband added. “Everyone is mad.”

Several parents and other local people who were present the day of the mass shooting have talked to the media, expressing distress at an apparent hesitation of law enforcement to storm the school – unless of course, it was to save their own children.

Police officers did not act sooner to stop the 18-year-old gunman, because the school district’s chief of police wanted to wait for backup and equipment, said Steven McCraw, director of the Texas Department of Public Safety.
Meanwhile, students were still trapped inside with the gunman, repeatedly calling 911 for help and on the outside, frantic families were being held back from entering the building – some even got put in handcuffs for “interfering in an active investigation.”

“From the benefit of hindsight, where I’m sitting now, of course it was not the right decision,” McCraw said. “It was the wrong decision, period. There’s no excuse for that.

“Enough is Enough.” said 30-year-old Jessica Morales, who stood outside her aunt’s house, heckling the Uvalde police vehicles as they passed by, during Biden’s visit.

“The police will stop you if you have no inspection stickers or go 2 miles over the speed limit,” she said to The Houston Chronicle. “But they are cowards. They held back the parents from going inside the school. They could have rescued the kids.”