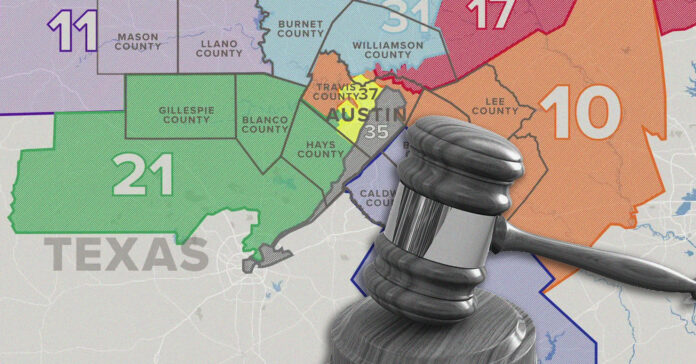 This year, Republican lawmakers came up with new political maps for Texas that largely favor the GOP. Even though people of color accounted for 95% of the state’s population boom over the last decade, these new maps severely blunt their voting strength.

According to The Dallas Morning News, lawmakers can draw maps in a way that benefits their party’s political future as long as they do not discriminate on the basis of race. For decades, Texas redistricting maps had to get federal approval and would always get changed or tossed out for violating the Voting Rights Act.

This year Texas was no longer required to get federal approval and court challengers are saying the redrawn congressional, legislative and State Board of Education maps do not reflect the major growth of the Hispanic and Black community.

As expected, the new political maps are already being challenged in court, these controversies over aspects of the boundaries could last several years.

The plaintiff Voto Latino filed in the federal court of Austin on Oct. 25. The complaint alleges that the new U.S House boundaries dilute communities of color’s voting strength. The suit asked the federal court to block the map and “order the adoption of a valid congressional redistricting plan” that adequately represents the state’s minority populations.

The lawsuit asks the federal court to toss out the new maps, because they are unconstitutional and violate Section 2 of the Voting Rights Act of 1965, also stating the court should set a “reasonable deadline” for state officials to enact new redistricting plans.

The Senators argued the Texas Constitution requires that redistricting be done in a regular session that won’t happen until 2023 and sued to block the Legislature from redistricting in a special session this year.

The Dallas Morning News reported that since the plaintiffs intend to pursue similar claims in the state court, the three-judge panel ordered the parties to file a joint status report “when they have determined the impact of the litigation in state court on this case”.