Texas lawmakers are expected to debate a plan this week that would raise the taxes consumers pay when they go shopping in order to lower the taxes homeowners and business owners pay on their properties.

Adding 1 percentage point to the rate of the sales tax, one of the state’s most regressive means of raising funds, would hit poor Texans hardest. But with less than a month left in the legislative session, new data is shedding light on how the proposal would benefit those with higher incomes at the expense of those with lower incomes.

An analysis of House Joint Resolution 3, which would ask voters to amend the Texas Constitution to authorize the sales tax hike, found that trading higher sales taxes for lower property taxes would benefit the highest-earning 40% of Texans while increasing the taxes paid by the remaining 60%.

The average Texas household in the bottom 20% of earners — those with household incomes less than about $37,600 — would expect to see its annual tax bill grow by about $21, according to the analysis.

Meanwhile, the average household in the highest 20% of earners — those with household incomes greater than about $149,400 — would expect to see its annual tax bill reduced by about $185.

Although the changes to most Texans’ bills would be small, the result of hiking sales taxes while lowering property taxes would be an overall tax system that is more regressive, meaning it takes a larger percentage of income from poorer people than richer people.

The sales-for-property tax swap is only one of several tax plans under debate at the Texas Legislature. Republicans who have endorsed the sales tax hike — including the trifecta of state leadership: Gov. Greg Abbott, Lt. Gov. Dan Patrick and House Speaker Dennis Bonnen — say they are willing to spend more on property tax relief this year beyond the dollars generated from an increased sales tax rate. The House and Senate have proposed spending at least $2.7 billion from the state treasury’s anticipated surplus to pay for additional property tax cuts in 2020 and 2021.

Doing both in combination could lead Texans in all income brackets to experience an overall tax cut. Still, it is likely that high-earning Texans and big businesses would see greater relief than lower-earning Texans. 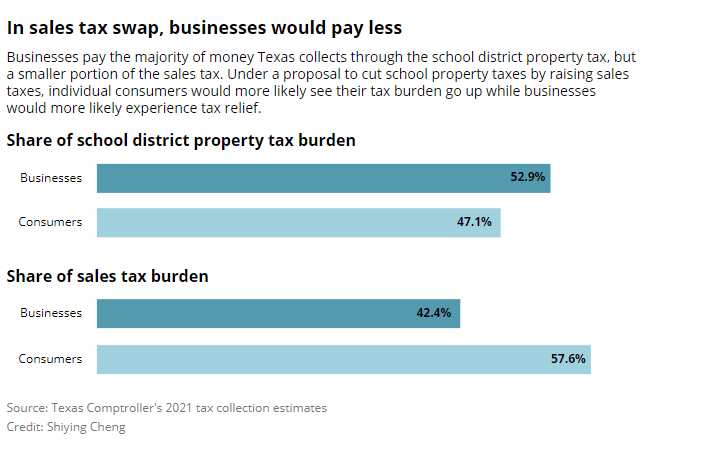 House Ways and Means Chairman Dustin Burrows, R-Lubbock, on Monday shared an analysis of the lower chamber’s combined tax plans that found savings for Texans in all income brackets.

Burrows’ analysis, which projected additional tax relief from a school-finance bill that’s currently under debate, found that the average household in the lowest 20% of earners would likely see an annual tax reduction of $11 under the House proposals, while the average household in the top 20% of earners would likely see annual tax savings of $384, according to the analysis. State funds supplement property taxes to pay for public schools in Texas.

But Dick Lavine, a senior fiscal analyst for the left-leaning Center for Public Policy Priorities, said the analysis — dependent on an infusion of at least $2.7 billion in additional state funds this year for property tax relief, with the details still under negotiation between the House and Senate — was intended to disguise the sales tax hike’s regressivity.

“You’re using the everybody-wins bill to try to swamp the effect of the bill that’s creating winners and losers,” he said.

Many conservatives favor regressive taxes like the sales tax because the overall tax levy depends on a person’s consumption and because everyone, regardless of income level, pays the same tax rate.

“In contrast to property taxes, individuals can control the goods they choose to purchase and the resulting sales taxes — and those purchases are only taxed once instead of every year,” Texas GOP chairman James Dickey said in a statement this week in support of the tax-swap plan.